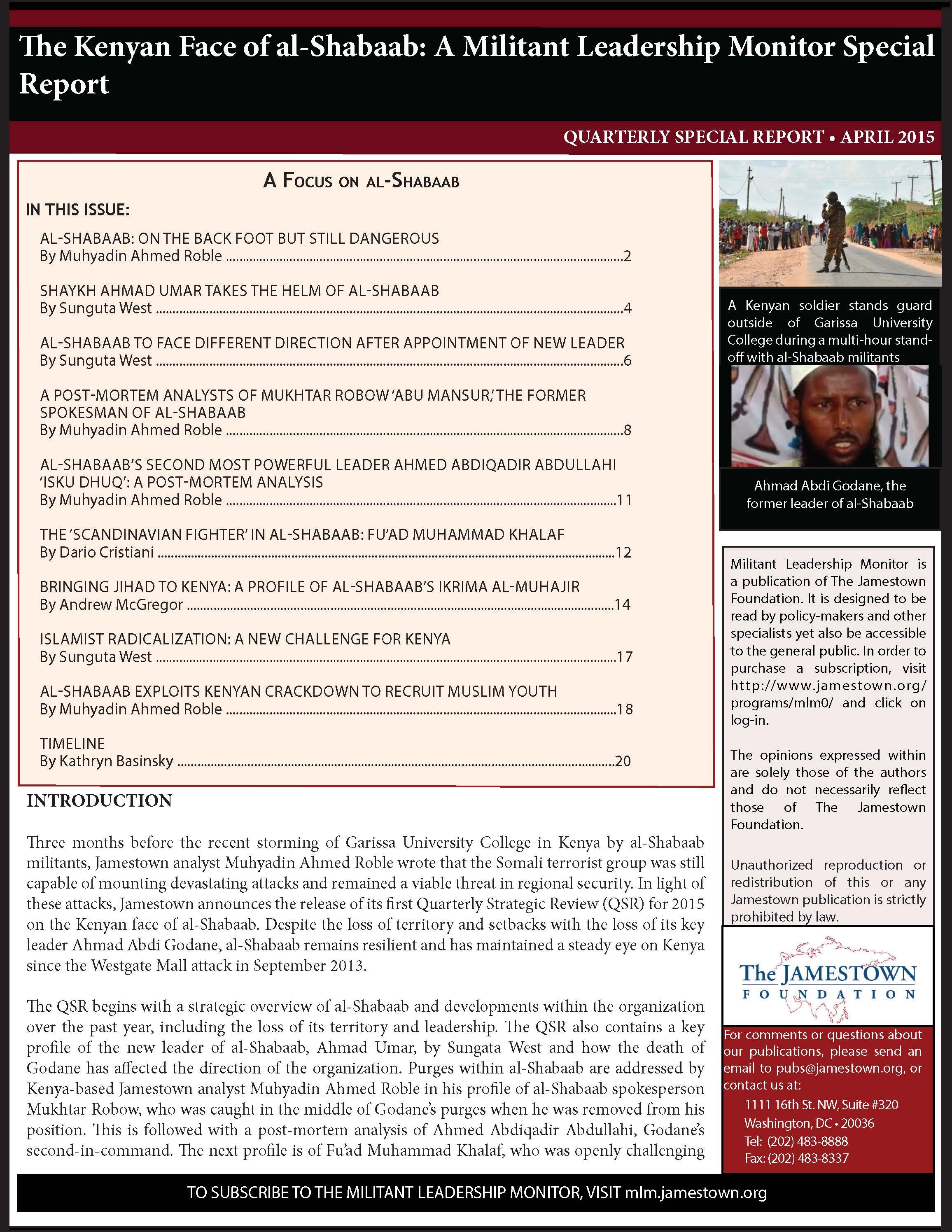 The Kenyan Face of al-Shabaab

Three months before the recent storming of Garissa University College in Kenya by al-Shabaab militants, Jamestown analyst Muhyadin Ahmed Roble wrote that the Somali terrorist group was still capable of mounting devastating attacks and remained a viable threat in regional security. In light of these attacks, Jamestown announces the release of its first Quarterly Strategic Review (QSR) for 2015 on the Kenyan face of al-Shabaab. Despite the loss of territory and setbacks with the loss of its key leader Ahmad Abdi Godane, al-Shabaab remains resilient and has maintained a steady eye on Kenya since the Westgate Mall attack in September 2013.

The QSR begins with a strategic overview of al-Shabaab and developments within the organization over the past year, including the loss of its territory and leadership. The QSR also contains a key profile of the new leader of al-Shabaab, Ahmad Umar, by Sungata West and how the death of Godane has affected the direction of the organization. Purges within al-Shabaab are addressed by Kenya-based Jamestown analyst Muhyadin Ahmed Roble in his profile of al-Shabaab spokesperson Mukhtar Robow, who was caught in the middle of Godane’s purges when he was removed from his position. This is followed with a post-mortem analysis of Ahmed Abdiqadir Abdullahi, Godane’s second-in-command. The next profile is of Fu’ad Muhammad Khalaf, who was openly challenging Godane’s decisions, by Dario Cristiani. Canadian based al-Shabaab expert Andrew McGregor also provides a profile of Ikrima al-Muhajir, a high-level Kenyan leader within al-Shabaab. Sunguta West then discusses al-Shabaab’s inroads in Kenya, giving details on al-Shabaab’s continued focus on this important country. Finally, Kathryn Basinsky provides a unique timeline of key events related to al-Shabaab that offer a retrospective on key developments within this organization since 2006.

The April issue of Militant Leadership Monitor begins with a profile of Maysar Ali Al-Jabouri, a Jabhat al-Nusra amir who is encouraging the split between al-Nusra and ISIS in Syria. This is followed with the next brief covering the connection between anti-balaka militias and Patrice Edouard Ngaissona in the Central African Republic.... MORE
$20.00 – $25.00 Select options
This issue of Militant Leadership Monitor includes in-depth portraits of Tripoli's Hussam Abdullah Sabbagh, Hamas Political Bureau Chief Khalid Meshaal, Egypt's Muhammad al-Zawahiri and the Toulouse gunman Muhammad Merah.
$20.00 – $25.00 Select options
In the June issue of MLM Nicholas A. Heras provides two briefs, one concerning a leadership dispute within the Syrian-back Abu al-Fadhal al-Abbas Brigade to Defend the Holy Shrine of Sayida Zeinab and a second brief about a ceasefire negotiated between MNLA leader Bilal ag... MORE
$20.00 – $25.00 Select options
In this Quarterly Special Report (QSR) on Mayhem in Mali, we focus on the various Islamist fighters who have taken over northern Mali. The QSR includes profiles of important personalities in the Sahel region such as Abou Zeid, a brutal, committed and resilient militant under... MORE
$20.00 – $25.00 Select options