While Islamic State (IS) is in decline in the central Libyan city of Sirte, another armed group with ties to the global jihadist movement is threatening to usher in a new period of instability in Libya. In a written statement posted on Twitter on June 2, commanders representing a number of Islamist militias in Libya announced the formation of the Benghazi Defense Companies (BDC), a group established to “defend [Benghazi] against the criminal followers of the former regime” (Twitter, June 2). Soon after the statement was released, the BDC launched a military campaign against units aligned with the Libyan National Army (LNA), a fighting force led by the deeply polarizing Khalifa Hifter, which controls much of eastern Libya.

In recent months, the LNA has made considerable gains against Islamist and jihadist militias in Benghazi, but the BDC threatens to reverse these gains and throw Benghazi back into a state of total conflict. The BDC’s ties with both jihadist groups and influential Libyan Islamist factions allow the group to draw support from a range of armed actors in Libya, making the BDC a potent military force. The BDC’s operations also shed light upon al-Qaeda’s covert strategy and growing influence within the Libyan militant landscape.

The BDC represents the latest effort by Islamist actors based in western Libya to weaken Hifter’s grip on power in the east. The BDC’s relationship with the Islamist coalition, which has been embroiled in a conflict with Hifter since May 2014, was revealed in the BDC’s founding statement. According to the statement, the group’s “sole source of reference regarding funding and fighting” was the Dar al-Ifta (Fatwa Office), a religious authority headed by Sheikh Sadiq al-Ghariani, who is recognized by some factions as Libya’s Grand Mufti (Twitter, June 2).

Al-Ghariani has been one of Hifter’s leading critics, and he has repeatedly expressed support for Islamist and jihadist factions fighting against the LNA (al-Monitor, June 11, 2014). Al-Ghariani has emerged as one of the BDC’s strongest advocates and has urged Libyan armed factions to unite behind the BDC (YouTube, June 12).

An examination of the BDC’s leadership cadre reveals further links between the group and the broader anti-Hifter coalition. Mustafa al-Sharkasi, one of the BDC’s top field commanders, previously served as the spokesperson for the air force of the Islamist-dominated General National Congress (GNC).

The BDC and al-Qaeda

While the BDC has done little to hide its relationship with Islamist actors in western Libya, it has repeatedly asserted that it is unaffiliated with any “domestic or foreign organization.” However, mounting evidence suggests that the BDC possesses ties with both local and regional jihadist groups, including al-Qaeda affiliates, and is collaborating with jihadist groups on the battlefield.

The BDC’s intimate relationship with the Benghazi Revolutionaries Shura Council (BRSC) – an Islamist coalition that includes the al-Qaeda-linked Ansar al-Sharia in Libya and several other figures associated with al-Qaeda – provides the clearest indication of the BDC’s links with jihadist actors in Libya. In its founding statement, the BDC claimed that it would act “in conjunction” with the BRSC in the latter’s fight against Hifter’s forces in Benghazi. A day after its establishment, the BDC announced that the Bushra Media Establishment, a pro-BRSC online media group, would become the BDC’s official media outlet. [1]

Several high-ranking BDC figures command forces that are either a part of, or are affiliated with, the BRSC. Ahmad al-Tajuri, one of the men who featured in a video announcing BDC’s establishment, currently serves as the commander of BRSC forces in western Benghazi. Faraj Shiku, another BDC leader, also serves as the commander of the February 17 Martyrs Brigade, one of the key factions within the BRSC. [2]

In addition to its close ties with the BRSC, the BDC has received rhetorical support from al-Qaeda affiliates. On June 25, al-Qaeda-backed social media outlets launched an online messaging campaign praising the BRSC and urging militants from across Libya to join the fight in Benghazi. Several prominent al-Qaeda figures participated in the campaign, including Hisham al-Ashmawy, the emir of the Egyptian group al-Murabitun, who praised militants in Benghazi for “defending Islam and its people in the face of the oppression and injustice,” and beseeched others to support the “mujahideen brothers” in any way possible (Twitter, June 29). Abdallah Muhammed al-Muhaysini, a leading jihadist ideologue based in Syria, similarly urged Libyans to “rush forth to support your brothers” in Benghazi. [3]

It is notable that none of the statements released during al-Qaeda’s messaging campaign explicitly mentioned the BDC. Nevertheless, it is likely that the campaign was intended to generate support for the BDC, given the fact that the messaging initiative was launched just three weeks after BDC’s establishment. Indeed, the fact that al-Qaeda officials never publicly expressed support for the BDC is consistent with al-Qaeda’s efforts to mask its influence in Libya and across the globe. Al-Qaeda has calculated that concealing its relationship with local actors in North Africa and maintaining a covert presence will allow the group to expand without attracting the attention of counterterrorism forces.

In an article published this March in al-Masra, an al-Qaeda in the Arabian Peninsula newsletter, Abu-Abd-al-Iylah Ahmad, a senior al-Qaeda in the Islamic Maghreb (AQIM) official, alluded to al-Qaeda’s clandestine growth model in Libya (Jihadology, March 15). Responding to a question about whether al-Qaeda had a branch in Libya, Ahmad explained that, for Libyan groups, pledging allegiance to al-Qaeda was of a lesser priority than combatting the “aggression” of the West and its local allies. Ahmad further explained that uniting all Libyan jihadist groups under al-Qaeda’s banner would take “time, effort [and] sacrifices from all parties.” Ahmad’s statements illustrate that al-Qaeda has chosen not to reveal its ties with local groups, an approach that the group has likely maintained in the case of the BDC.

Another indication of al-Qaeda’s clandestine relationship with the BDC and its allies emerged in late July, after the BDC claimed to have shot down a helicopter carrying three French soldiers (some sources refute the BDC’s claim, instead asserting that the helicopter crashed after a technical error). Several days after the incident, a statement attributed to the elusive al-Qaeda commander Mokhtar Belmokhtar was posted online (Jihadology, July 23). After lambasting the French for intervening in North Africa and the Middle East, the author of the statement exhorted Libyans to “rally around their righteous scholars,” and specifically praised Sheikh al-Ghariani for “exposing the truth in the face of falsehood.”

The expression of support for al-Ghariani could be interpreted as an endorsement of the BDC, given the group’s stated links with the Libyan sheikh, and it further illuminates the BDC’s shadowy ties with al-Qaeda.

The BDC is now well positioned to play the role of spoiler in Libya’s ongoing political negotiations.

As the new group continues its military offensive, it could disrupt United Nations-led efforts to bring Hifter and his allies to the negotiating table, instead galvanizing Hifter to pursue a military solution. This would further destabilize Libya and play directly into the hands of al-Qaeda, which continues to exploit civil conflict and chaos across the Middle East and North Africa. 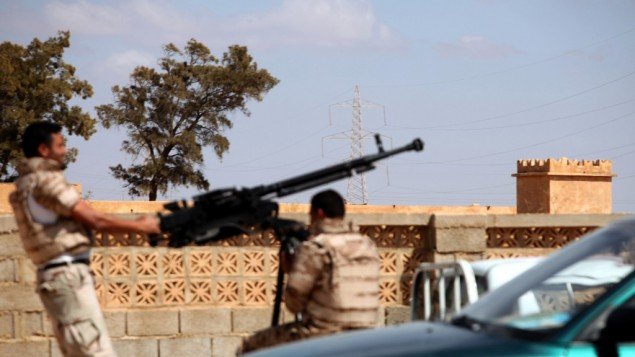 Back
BRIEFSNext
Why Islamic State Is Clinging on to the ..