“Alleingang,” a go-it-alone policy of rapprochement with Moscow and differentiation from Washington, is an oft-discussed temptation and pitfall of German foreign policy. At present the Christian-Democrat chancellor, Angela Merkel, is engaged in an Alleingang to satisfy Russia by stopping Georgian and Ukrainian Membership Action Plans (MAPs) ahead of the upcoming NATO summit.

These MAPs are among the defining issues for the alliance at its April 2-4 Bucharest summit. Germany’s Social-Democrat-led Ministry of Foreign Affairs had until now resisted those MAPs quietly within a group of MAP-“skeptical” governments, most of which were still potentially open to pro-MAP arguments. The minister, Frank-Walter Steinmeier, cast himself as one among those “skeptics.” But the Chancellor’s Office has now apparently convinced Merkel herself to lead the opposition to Georgian and Ukrainian MAPs and coordinate with Russia to that end. Blocking those MAPs is now Berlin’s bipartisan policy, in a manner that singularizes Germany from among all allies.

The ministerial meeting of NATO countries in Brussels on March 6 ended without a consensus on the MAPs. However, the ministers of foreign affairs agreed to refrain from airing the differences in public and to seek consensus at a follow-up meeting ahead of the April 2-4 summit. Based on this understanding, the United States and other MAP-supporting countries did not come out publicly with strong statements, nor did the smaller group of MAP-skeptics. Only the German chancellor went public, her views apparently fortified by a meeting with Russian President Vladimir Putin.

Two days after the Brussels ministerial, Merkel visited with Putin and President-elect Dmitry Medvedev in Moscow. The chancellor rushed to be the first Western leader to congratulate the Kremlin leaders in person after their presidential election. Putin acknowledged the gesture as reflecting “the privileged nature of our bilateral relations.” He went on to assail the European Union’s reservations about a new treaty with Russia: such reservations stem from “intrigues, scandals, and hysterics” while “covering mercenary interests under a so-called European solidarity” (Interfax, Itar-Tass, March 8).

At the concluding joint briefing, Putin announced: “Regarding NATO, the Chancellor and I said today that the open-ended enlargement of a military-political bloc seems to us not only unnecessary, but also harmful and counterproductive.” Thus Putin made clear that he and Merkel shared a common position on the Georgian and Ukrainian MAPs. He went on, “Ultimately each country decides for itself how best to ensure its security, and we will definitely accept whatever the Ukrainian and Georgian peoples decide. But it must be a decision of the people, not the political elite” (Kremlin.ru, Interfax, March 8). Merkel reprised this tactical argument in her March 10 speech in Berlin, strongly opposing the Georgian and Ukrainian MAPs (see EDM, March 13).

In that speech, the Chancellor stated that public support for NATO membership in an aspirant country must be “qualitatively” high — apparently dismissing Georgia’s 77% popular support as merely “quantitative.” She also noted, correctly in this case, that Ukrainian public support was low. But — as some senior Ukrainian officials promptly commented — the MAP application has been signed by Ukraine’s president, prime minister, and chairman of parliament, as a fully valid sovereign decision of the Ukrainian state. Apart from this fact, such signatures should presumably have satisfied Merkel’s demand for “qualitative” as distinct from quantitative support.

Merkel delivered her March 10 speech in the presence of NATO’s Secretary-General Jaap de Hoop Scheffer, who supports a MAP at least for Georgia on the strength of that country’s performance. Merkel did not mention this basic NATO criterion. Instead, she claimed that the unresolved conflicts on Georgia’s territory disqualify the country from a MAP and/or membership in the alliance (Die Welt, Frankfurter Allgemeine Zeitung, March 11).

This thesis contradicts NATO policy, which stipulates that “frozen” conflicts on a country’s territory are not an obstacle to membership in the alliance or to a MAP. De Hoop Scheffer has repeatedly and publicly confirmed this policy during his tenure as NATO leader. As he and other NATO officials have noted, to condition membership aspirations on resolution of the conflicts would be tantamount to giving Russia a veto power on the aspirant country and on the policy of the Alliance itself.

Germany itself experienced a frozen-conflict-type situation during the 45 years of Soviet occupation of a large part of the country. At times, a shooting war seemed imminent over the divided Berlin. But the United States and NATO never invoked that situation as an argument against Western Germany’s membership in the alliance. Had the allies been guided by Merkel’s logic of today, they could have disqualified Western Germany from NATO membership because of that frozen-conflict situation. But the U.S.-led allies applied a different logic and welcomed Western Germany into NATO. That move ultimately enabled Germany to reunify within NATO; and Merkel — who grew up in the Soviet occupation zone — to rise to the chancellorship. At the moment, however, she is campaigning to block the paths of other ex-Soviet-ruled countries toward the alliance. 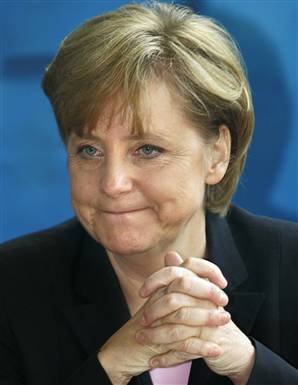