RT-Inform, a firm owned by the Russian non-profit state corporation Rostec, announced, on June 9, the creation of a protected instant messenger (IM) application designed for use by Russian companies and state agencies (gosstruktury) (Rbc.ru, June 8). The financial details of this initiative are being kept secret, but Sergey Kravtsov (the owner of OMMG Technology and the inventor of the cloud messaging service “4talk”) presumed that between $2 million and $5 million may have been spent. According to official reports, the messenger is part of the government’s import-substitution strategy and also aims to protect Russian cyber space (Realnoevremya.ru, June 7).

Yet, deeper analysis suggests RT-Inform’s publicized protected IM actually represents an attempt to “domesticate” the global web inside Russia. In fact, the first concrete step in this direction was proclaimed in October 2014. At that point, the Russian Security Council, with the personal blessing of President Vladimir Putin, moved to implement measures to establish separate infrastructure for the Russian Internet (often referred to as the “Runet”), capable of operating autonomously and apart from the rest of the global Internet (Lenta.ru, October 28, 2014). Furthermore, during a visit to Vladivostok in 2015, the secretary of the Security Council of Russia, Nikolai Patrushev, harshly criticized local officials for using software produced by foreign technology companies such as Google, Yahoo!, and WhatsApp, thereby allegedly jeopardizing Russian cyber security and confidential data (TASS, August 26, 2015).

As early as 2014, the Minister of Telecom and Mass Communications Nikolai Nikiforov released a special report discussing the “sovereignty of the Russian Internet” (Vedomosti.ru, March 26, 2015). Minister Nikiforov’s report proposed to “protect” the Runet by transferring it under direct and unrestricted control of the government and simultaneously restricting the involvement of foreign actors. At the time, this report did not receive extensive public attention. But now it appears that the time for decisive action by Moscow has finally come.

On April 18, 2016, Alexander Bastrykin, the head of the Russian Investigative Committee, called on the authorities to extensively make use of China’s experience in the domain of cyber censorship. Among other measures, he recommended empowering law enforcement agencies to shut down websites featuring allegedly “extremist content,” even prior to a ruling by a court. According to Bastrykin, “extremism” inter alia encompasses the “falsification of national history” as well as “questioning the results of the referendum on accession of Crimea to the Russian Federation.” (Kommersant.ru, April 18). Reportedly, between November 2012 and April 2016, “hundreds of thousands” of ordinary people sent in requests to Russian media regulators demanding the government shut down various “extremist” webpages (Rosbalt.ru, May 13).

The following month, on May 30, it was announced that state officials and the military would now be denied the right to use foreign instant messenger apps while at work or on duty. According to the Russian daily Kommersant, services like WhatsApp, Viber, Skype and Telegram are the main targets and must be substituted with domestic-made IMs (Kommersant.ru, May 30). Last year, Russian Communist Party member Vadim Soloviev proposed prohibiting state officials and members of the Russian parliament from using Google, Yahoo!, and WhatsApp (RT, October 6, 2015). His draft bill was initially rejected, but the idea seems increasingly more plausible today. Russian officials repeatedly assure that these restrictions would only be in effect during government employees’ working hours. Namely, the head of the Duma Committee on information policy, Leonid Levin, stated that the initiative is designed to protect the careers of civil servants by securing confidential information used in the scope of their duties; whereas everyone is free to use any software they like in their private life. According to the Ministry of Finance, there are 108 state officials for every 10,000 persons in Russian Federation, which means that more than 1.5 million people could be denied free access to foreign IMs. Moreover, if military personnel are included, the overall number could reach a staggering 2.5 million Russians.

Even this formidable number could be dwarfed if the government decides to implement further restrictive actions on ordinary Russians. According to the international media market research and consultancy firm TNS (data presented in March 2016) the number of users in Russia of foreign apps Skype, WhatsApp, Viber and Telegram may be close to 22 million people (RBTH, June 6), suggesting that roughly one in six Russians could be cut off.

And these might not be merely vague or distant prospects. According to the newspaper Vedemosti, the Ministry of Telecom and Mass Communications (Minkomsvyaz) of the Russian Federation has drafted a document conditionally titled “About the Autonomous System of the Internet” (Vedomosti.ru, May 27). Reportedly, this document envisages the proliferation of governmental control over national cyber security, which could potentially lead to the establishment of wholesale control over the entire domestic Internet infrastructure. Moreover, should this draft become law, the state would be able to establish effective control over all online traffic—both internal and incoming—resulting in the country’s complete cyber isolation. Under this scenario, Russians would be able to access the Internet only via domestic servers, with information being carefully selected for them (Ain.ua, April 29, 2014).

The deepening economic crisis, mounting public discontent, growing social tensions and worsening living conditions are likely to urge the Kremlin to increase its reliance on isolation as a remedy against social explosion, especially considering the role the Internet played in the Arab Spring and the EuroMaidan, in Kyiv. That is why cyberspace is likely to become a matter of chief concern and an object of new attacks by aging Russian elites, particularly those who feel ill at ease with the prospect of Russia becoming more open to the rest of the world.

Many specialists have rushed to compare the steps being undertaken by Moscow in the domain of cyber security to the “Great Firewall of China.” Such characterizations overstate the facts: these comparisons fail to capture the immense differences in the mentalities of the two nations on the one hand, and a profound incongruence in political will in both countries on the other. Nevertheless, clearly the Kremlin is attempting to draw a “cyber curtain” across Russia, thus isolating the population and making it more difficult for the rest of the world to obtain reliable information from the inside. 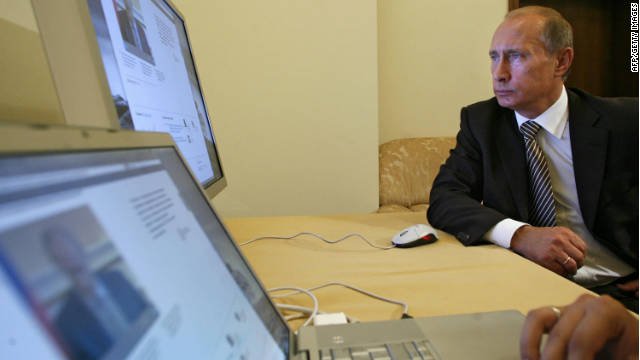 The Jamestown Foundation was proud to host a conference on... END_OF_DOCUMENT_TOKEN_TO_BE_REPLACED

On June 6, Jamestown’s President Glen E. Howard was quoted by Task and Purpose in an article on Russia’s Chechen fighters in Ukraine. END_OF_DOCUMENT_TOKEN_TO_BE_REPLACED