India’s controversial anti-Maoist vigilante group, Samajik Ekta Manch (SEM), has announced it will disband. Set up in December 2015 with the stated goal of ridding Chhattisgarh’s Bastar region of Maoists and supporting the police in their work, the SEM had claimed to be a peaceful initiative. Nevertheless, it has been accused of carrying out a violent campaign against rights activists and journalists in Bastar, the center of India’s Maoist conflict. In one recent incident, a journalist was hounded out of Bastar for her articles on alleged police atrocities; in another incident, an Adivasi (tribal) activist’s face was smeared with scalding, corrosive grease for campaigning against extra-judicial killings and rapes by Bastar police (Scroll.in, Feb 8; The Telegraph [India], February 29).

Police patronage of SEM has been evident, with SEM leaders boasting of their “official connections.” Their weapons have been traced back to police armories, according to Bibhu Prasad Routray, an expert on the Maoist conflict. [1] Meanwhile, senior police officials have attended the group’s public meetings and were captured on camera admitting to “facilitating” and supporting the SEM’s work (India Today, April 14).

Media accounts of the SEM’s alleged violence are likely just the tip of the anti-Maoist vigilante iceberg. Dozens of state-supported militias operate across areas where the Communist Party of India–Maoist (CPI-Maoist), India’s largest Maoist group, is active. In Jharkhand, for instance, “terror gangs” like the Jharkhand Jana Mukti Parishad operate with impunity (Hindustan Times, January 24). Unlike in Chhattisgarh, the Jharkhand police use breakaway factions of the CPI-Maoist “to wage a war against the parent outfit.” [2]

The state’s arming and use of vigilante groups to tackle the Maoists is not a recent phenomenon in the conflict. It was already a part of the government’s strategy to counter Communist revolutionaries in Telengana in the 1946-1951 period. From the late 1980s, militias like the Kranti Sena and the Nallamalla Cobras were an important part of the Andhra Pradesh police’s anti-Maoist strategy. They were used to eliminate Maoists through extrajudicial methods and silence civil rights activists (Tehelka, March 4, 2006). Such state-sponsored anti-Maoist vigilantism reached unprecedented heights in 2005 with the launch of the Salwa Judum in Bastar. The havoc it created prompted the Supreme Court to declare Salwa Judum as “illegal and unconstitutional” in 2011. The court ordered it be disbanded and forbade the Chhattisgarh government from supporting any civilian vigilante force. It was the state’s responsibility to prevent the operation of such groups, it said (The Hindu, July 5, 2011). Despite this ruling, the use of vigilantes in the state’s anti-Maoist strategy continues. June 2005 saw the emergence of an anti-Maoist “movement” named Vikas Sangharsh Samiti (VSS), which has striking similarities to Salwa Judum (Indian Express, June 13, 2015). Others like the Adivasi Ekta Manch, the Mahila Ekta Manch, and the SEM itself followed. [3]

When India’s decades-old Maoist conflict erupted violently in north Bengal in 1969, the government was successful in crushing that uprising through the use of force, but the armed struggle spread to other parts of the country. The heartland of the conflict has since moved, and it has gone through phases of escalation and de-escalation, with the current phase the most violent.

The CPI-Maoist’s aim is to capture state power. It claims to represent India’s most deprived— Adivasis, Dalits (former ‘Untouchables’), and the rural poor. Its espousal of Adivasi causes is partly motivated by its ideology, but has also developed because its guerrilla strategy requires it to operate from hills and forests, which are inhabited by the Adivasis. It needs their support for survival and fighters, hence its articulation of Adivasi issues. The Adivasis, meanwhile, are aggrieved over the loss of their ancestral lands and access to forests, depriving them of their homes and means of survival. Dams and mining projects have displaced millions. While most Adivasis prefer non-violent activism to a violent confrontation with the state, state repression and the branding of these campaign groups as ‘Maoist fronts’ has pushed a growing number of Adivasi youth to join the Maoists.

The State’s strong opposition to the Maoists – evident from its willingness to use force, including “any element of its national power” against them – is a response to the Maoist’s own aims and violent methods (The Telegraph [India], October 18, 2014). At the same time, however, the land that the Adivasis inhabit, swathes of which are under varying degrees of Maoist influence, is mineral-rich. Industry watchdogs have lamented that Adivasi protests and the Maoist insurgency in “mineral rich heartlands” are disrupting the investment plans of mining companies (Frontline, February 13-26, 2010). The state’s stepping-up of counter-insurgency operations, and continued reliance on militias despite their illegality, seems aimed not just at eliminating the Maoists, but at forcing the Adivasis off their land in order to free it for exploitation by mining companies.

Armed by the police, Salwa Judum unleashed unprecedented violence on the local population, depopulating entire villages and triggering a massive displacement of the Adivasis (Scroll.in, April 8). As a consequence, around 640 villages “sitting on tons of iron ore” became “available for the highest bidder,” according to a government report. [4]

Business interests are also believed to lie behind the recent spurt in vigilante groups in Bastar. VSS took shape soon after Chhattisgarh government officials signed memorandums of understanding over a steel plant and a railway line (Indian Express, June 4, 2015).

There are operational benefits to using local Adivasi militias against the Maoists. Bibhu Routray, an expert on the Maoist conflict, observed: “Although not trained, the Adivasi know the terrain and the CPI-Maoist inside out. Deploying Adivasi against Adivasi is an effective way of using the best local resources available against the Maoists.” [5]

Adivasi vigilantes may have effectively contributed to the weakening in recent years of the CPI-Maoists, which has lost several leaders and cadres. However, the state’s use of vigilantism may also be fueling the Maoist conflict. State backing of vigilante torture and killing has deepened Adivasi disaffection with the state and it is the Maoists who benefit from this alienation.

The impact of the SEM, Salwa Judum, and other vigilante groups on Adivasi society and the Maoist conflict is instructive. Gradually the leaders of such groups begin to operate autonomously, refusing to take orders from the police. The emergence of Salwa Judum led directly to the ‘warlordization’ of Bastar. The armed conflict there assumed the dimensions of a near civil war. In certain places, such as Dornapal in Chhattisgarh, it was the Salwa Judum rather than the state that called the shots. [6]

There is palpable fear in Bastar that the days of Salwa Judum are back. It is doubtful that the dissolution of the SEM marks the end of vigilantism in Bastar. If history is any guide, state support for such groups will likely ensure it continues, albeit under another name. 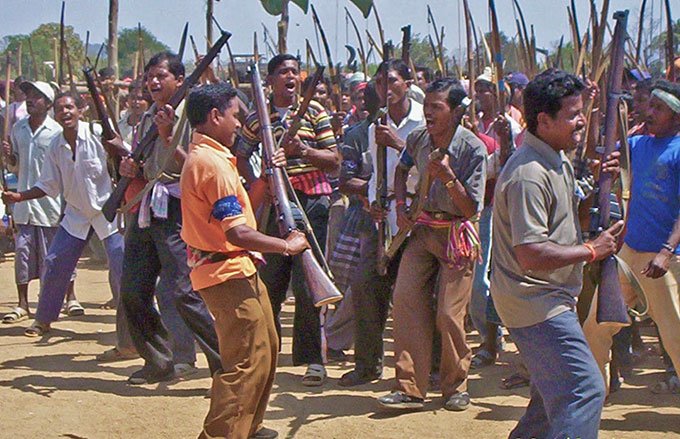 Back
BRIEFSNext
Kenya Gambles on Closure of Somali Refug..

The Jamestown Foundation is proud to present a virtual event to... END_OF_DOCUMENT_TOKEN_TO_BE_REPLACED

From the fourteenth to the seventeenth centuries, the Christian nations of Europe and the Shiites of Persia were forced to defend their lands against the inroads of an ever expanding Ottoman Empire, an empire whose awesome war machine at times appeared strong enough to absorb its immediate neighbors. One... END_OF_DOCUMENT_TOKEN_TO_BE_REPLACED