Getting Libya’s economy back on track is fundamental to the country’s future. With the Government of National Accord (GNA) finally working from inside Libya and Fajez Sarraj in place as the new prime minister, many foreign powers hope the situation is finally improving (al-Jazeera, May 17). Libya’s economic wellbeing, however, is tied to its oil sector. Once highly centralized under Muammar Gaddafi, control of the oil sector has become fragmented, informal, and localized. Local groups seek to control oil assets with a view to securing revenues and acquiring political clout, while Islamic State (IS) fighters aim to foster chaos by dismantling the country’s oil infrastructure.

The geographical distribution of Libya’s oil, the country’s primary economic resource, is unbalanced. The country’s largest oilfields, refineries, and terminals are mostly located in the east, which has historically accounted for almost 70 percent of national production. As a result, following the collapse of the Gaddafi regime, forces in the east increasingly demanded a greater share of oil revenues. These forces were the main protagonists of the oil blockades that began in 2013, the point at which Libyan production started to collapse, creating the conditions for economic crisis.

By the end of 2015, the Libyan economy had been in recession for three consecutive years. Real GDP shrank by 10 percent, according to World Bank figures, having dropped by 24 percent in 2014. In 2015, oil production fell to 0.4 million barrels per day (bpd), representing barely a quarter of the potential output for Libya – production was at 1.6 million bpd before the eruption of conflict. This has had a knock on effect for Libyan public finances, which are highly dependent on oil revenues. The balance of payment, as well as the fiscal balances, has collapsed owing to the declining oil exports, and Libya has posted a twin deficit over the past three years. The non-hydrocarbon sector also remains fragile, suffering from supply chain disruptions and a lack of investment.

The Politics of Libyan Oil

The Libyan economy is entirely dependent on oil. The country is a typical example of what economists term the “rentier state,” as its economy depends entirely on the rents it can extract from its natural resources. Libya has the biggest proven oil reserves of the entire African continent – 48.4 thousand million barrels as of the end of 2014, according to BP 2015 Statistical Review of World Energy. [1] According to the IMF’s calculations, under normal conditions, oil accounts for 70 percent of GDP and represents more than 95 percent of Libya’s exports. [2]

Libya’s oil industry has historically underwritten its enormous public sector. Public jobs under Gaddafi were – and indeed still are today – a way of buying social stability, making Libya’s stability dependent on its oil revenues. Control of the oil resources allows the country’s rulers to reward loyalty, co-opt potential competitors, and crush dissent. It was the imperialistic exploitation of Libyan natural resources under King Idris that was one of the main grievances fuelling the putsch that brought Gaddafi to power in 1969. Under Gaddafi the situation changed slightly, but the clientelist system remained in place. Gaddafi simply changed which tribes and groups benefited from the oil wealth.

Under Gaddafi, control over the Libyan sector was highly centralized. Oil revenues served the regime to support its patronage network and to buy the acquiescence of the population, but the ‘trickle-down effect’ remained limited. Only a tiny part of this wealth reached ordinary Libyans. Gaddafi opened up the sector further to international oil companies only when it had become clear his peculiar socialist approach was jeopardizing the economy and had left the Libyan oil industry in a state of disarray. As the 2011 revolution got under way, Gaddafi made efforts to couch the revolution in terms of a Western plot to take over Libyan oil interests (RT, March 16, 2011).

The Situation After Gaddafi

Following Gaddafi’s fall, the different militias on the ground managed to swiftly recover oil production. In a matter of months, Libya was able to pump as much oil as it had before the eruption of the conflict. Payments to the foreign companies were timely, and the overall sector did not suffer any significant disruption.

By 2012, however, as Libya’s post-revolutionary settlement proved fragile and the relations between the different rebel groups that toppled Gaddafi soured, the fragmentation that was increasingly characterizing the political landscape became apparent in the oil sector as well. Rebels groups controlling the areas in which oil installations and terminals were located used their territorial control to bolster their political status.

Ibrahim Jadhran was possibly the key revolutionary leader in this respect. Originally from Ajdabiya and a member of the Magharba tribe, he rose to become the leader of the Petroleum Facilities Guards (PFG), a role he used to enforce the blockade of oil ports in the east in 2013. He also tried to sell oil on his own, although that attempt failed (Slate Afrique, March 13, 2014; see also Terrorism Monitor, April 4, 2014)

While Jadhran is considered closer to Islamist groups, he played on local social concerns, noting that Cyrenaica had historically been neglected by Tripoli despite providing the bulk of the country’s oil revenue. Jadhran later aligned himself with General Khalifa Haftar, but the two split. He has now pledged allegiance to the new Sarraj government of which Haftar is one of the key opponents (Libya Herald, March 31; al-Wasat, January 6; see also Militant Leadership Monitor, January 2014).

Jadhran’s forces are mostly located in the east, though they have a limited presence in the rest of the country. Evidence suggests the PFG is simply a collection of small groups of militants that remain loyal to Jadhran.

Control of the Oil Installations

Conflicts concerning the control of Libya’s oil sector are also raging in the south, where they overlap with other long-standing grievances and the struggle for the control of the Trans-Saharan smuggling routes. Tubu leaders, such as Ali Sida and Barka Wardougouhe, have made clear that they want a fair share of oil revenues. The Tubu, who had been discriminated against under Gaddafi and have historical tensions with the Arab and Bedouin tribes of southern Libya, now control the areas of the oil basins of Mourzouk and Ghadamès.

Fearing marginalization, they allied themselves with groups from Zintan and the Tobruk government. In return for their support, the Tubu were granted access to the Sharara oil field. That, however, brought them into open conflict with another of their long-standing rivals, the Tuaregs, as groups of Tuareg who supported the Tripoli-based government had been put in charge of Sharara by Misrata militias (al-Jazeera, June 22, 2015; Mondafrique, January 27; Libya Herald, February 17; Jeune Afrique, March 12, 2012).

In this context, the emergence of IS as a significant security threat within Libya has added a new dimension to the problems associated with oil production. IS established a presence in Libya in 2014 and has slowly strengthened its position (see Terrorism Monitor, March 20, 2015). Over the past few months, the group has increased the number of attacks against oil installations in Libya (Le Monde, January 1), January 7; Al-Monitor, May 19). In Syria and Iraq, it has taken control of oil fields and obtained revenues from oil sales, using the same smuggling routes that the old Iraqi Baathist regime used to avoid Western sanctions (See Terrorism Monitor, October 10, 2014).

In Libya, however, IS has been unable to do this. It is much more difficult in Libya to sell oil outside of the official NOC channels. In contrast to Iraq and Syria, Libya exports its oil and gas mainly through ships and pipelines. Its smuggling channels, which run from the coast deep into the south, are not a practical route for oil barrels. Anyway, they are controlled by Tubu, Tuareg, and Arab Bedouin tribes who would be unwilling to cede control to IS. Such a move would also bring IS into conflict with militants associated with Al-Qaeda in the Islamic Maghreb (AQIM), which has been working in the wider Saharan/Sahelian region and has built significant contacts with local stakeholders over the past ten years.

These logistical difficulties mesh with the wider political agenda of IS. The group has clear regional and global ambitions, but these are secondary – at least on a tactical level – to the interests the group has in the Syrian-Iraqi theatre. Events in Libya should be seen through this lens. IS has no interest in becoming a proper Libyan actor with a stake in the ongoing negotiations to reach a political solution there. Indeed, IS hopes to nurture the chaos in Libya through its own peculiar form of economic jihad. This is not a purely IS phenomenon, but it is an operational evolution that has characterised the wider jihadist world. Other examples are the 2013 jihadist attack on In Amenas in Algeria, and the AQIM attacks against oil installations in Yemen over the past decade.

As such, IS in Libya is acting to strengthen its brand and status and reduce pressure on its operations in Iraq and Syria, where the bulk of its interests still lie. In contrast to local militant actors, IS has an interest in destroying oil platforms and terminals to undermine Libya’s economy. In the short-term, the group’s threat to oil production and the industry’s physical assets, such as platforms and pipelines, is substantial. Its presence is also a deterrent for companies looking to invest in Libya.

Looked at in the medium-to-long-term, however, IS is not the most significant threat to Libya’s oil sector. Oil companies are used to operating in volatile environments. While IS appear more dangerous than other extremist groups, many companies do not consider them a structural impediment, but merely a risk that pushes up operating costs due to increased security spending.

For the long-term, Libyan authorities must address a number of aspects to strengthen the competitiveness of its oil sector, including possibly revising its Exploration and Production Sharing Agreements (EPSAs). The ESPA IV, imposed on the oil companies by Gaddafi, constituted what Bob Fryklund, the president of ConocoPhillips in Libya from 2005-2006, called the “toughest terms in the world,” when he opened Libya up to foreign investments (Wall Street Journal, April 15, 2011). At the time, rising global oil prices meant oil companies were willing to accept the terms, but that has now changed. Although global oil prices are rising again after two years, it is likely that the era of $100 a barrel is over. One of the recurrent topics of debate among the Libyan elites immediately following the revolution was reform of EPSA IV (Libya-businessnews.com, December 13, 2012).

As Prime Minister Sarraj has stressed, the Libyan economy needs to recover if there is to be a transition to a more stable order. Without security, however, it is difficult to promote economic growth, and the oil sector’s problems are significant.

Libya’s oil sector has suffered three years of protests, blockades, political maneuvering, and local rivalries, as well as weathering the ups and downs of the global oil market. Furthermore, the sector’s significant structural problems have yet to be addressed, and the rise of IS in Libya has created a new security threat to the industry as the group pursues an economic jihad to foster chaos in Libya. While the security threat remains an immediate concern, structural issues within the oil sector, if not addressed, could represent the greatest impediment Libya’s development over the long term.

The interplay of these short-term security threats and medium- and long-term problems represent a significant burden for the future of the Libyan oil sector. To be addressed, these challenges need the kind of institutional and governance capabilities that Libya at present connot provide, and which Sarraj will need time to develop. 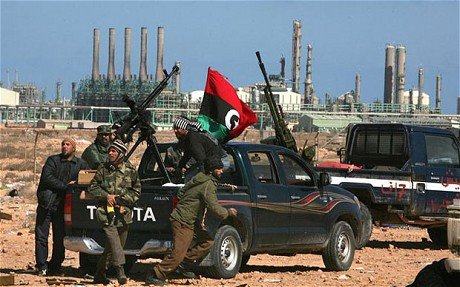 The Jamestown Foundation is proud to present a webinar on China’s... END_OF_DOCUMENT_TOKEN_TO_BE_REPLACED

On May 11, A News interviewed Jamestown Analyst Mykola Vorobiov about the current state of Russia’s invasion of Ukraine. END_OF_DOCUMENT_TOKEN_TO_BE_REPLACED

The March 2015 issue of Militant Leadership Monitor begins with two briefs on Syrian militants. Muhammad al-Faris is a supporter of President Bashar al-Assad in Qamishli, a Kurdish-majority area of northeastern Syria. Major Yassir Abd al-Rahim is a defected Syrian artillery officer who is part of the newly formed... END_OF_DOCUMENT_TOKEN_TO_BE_REPLACED