In Kyiv, on July 15–16, US Assistant Secretary of State Victoria Nuland prevailed on President Petro Poroshenko and parliamentary leaders to accept constitutional liabilities toward the Russian-controlled Donetsk and Luhansk territories. Nuland’s intervention achieved its goal, but not without a severe political commotion in Kyiv.

The Ukrainian president and parliamentary leaders had already made public their version of the relevant constitutional amendment on July 1, for submission to parliament on July 16. Their version fell carefully short of committing Ukraine to legitimize the Donetsk and Luhansk secessionists. Nuland, however, inspired some urgent night-time editing of that constitutional amendment, for submission to the parliament the next morning, July 16; and she watched in the chamber how the parliament approved the modified amendment, which removes Ukraine’s first line of constitutional defense against legalizing the secessionist authorities (Dzerkalo Tyzhnia, Ukraiynska Pravda, July 16–19).

Under the modified amendment, Ukraine becomes more vulnerable to being pressured next into approving a law on “Specific features [Osobennosti] of conducting the local administration in certain areas of the Donetsk and Luhansk provinces [i.e., Russian-occupied territory].” With “Osobennosti,” the title of that promised enactment has now been upgraded by one notch, compared with the preceding version. More significantly, the reference to that promised law has now been moved, from the transitory provisions of the law to amend the constitution into the transitory provisions of the constitution itself (Ukrinform, July 16, 17).

That move seems to commit Ukraine to a constitutional enactment, instead of an ordinary law, regarding those “specific features” of the Donetsk-Luhansk administration. Ukraine had earlier (March 17) enacted an ordinary law to that effect, but its application remains conditional on democratization and demilitarization of the Russian-controlled territory. And while an ordinary law, once adopted, can be changed or canceled with a simple majority of the votes in parliament, a constitutional enactment, once adopted, would require a two-thirds majority to revise or rescind. Thus, Ukraine has seen a first move to restrict its latitude of decision.

Nuland’s intervention is to be seen in two contexts. First, Western powers are increasingly pressuring Ukraine to fulfill the Minsk Two “agreement’s” political clauses unilaterally, without seriously expecting Russian compliance with the military clauses. The Minsk Two document is enforceable on Ukraine only; but—whether in its letter or in its spirit—Minsk Two is not enforceable on Russia. European demarches to Kyiv intensified in recent weeks, culminating in German Chancellor Angela Merkel’s and French President Francois Hollande’s latest rounds of telephone diplomacy. They asked Kyiv to legitimize the Donetsk and Luhansk secessionist authorities in the Ukrainian constitution and through elections (see EDM, July 9, 10).

The other context of Nuland’s intervention is the diplomatic rapprochement between the United States and Russia over the Middle East. This has spawned the bilateral channel of Nuland and Russian Deputy Foreign Affairs Minister Grigory Karasin, to deal with the problem of Ukraine. Initiated in May and fully activated in June, this channel has (perhaps temporarily) overtaken the Normandy Quartet (Russia, Germany, France, Ukraine) as a negotiating format on Ukraine. While Ukraine is directly represented in the Normandy Quartet, it is unrepresented in the Nuland-Karasin channel.

All those powers are negotiating over Ukraine with their eyes fixed upon the calendar. The Minsk Two document’s article 11, by far the most complex, forming its political core, carries a deadline for implementation: “until the end of 2015.” This is the only article with a deadline. The other articles are to be implemented in a certain logical sequence, but without calendar deadlines. Under article 11, Ukraine is supposed to legalize the Donetsk-Luhansk authorities constitutionally and legitimize them in elections jointly arranged, all by December 2015. According to Ukrainian officials at the Minsk negotiations in February, President Vladimir Putin’s aide Vladislav Surkov is this article’s main author (Dzerkalo Tyzhnya, July 16).

Ukraine’s Western partners insist that Ukraine must demonstrate its good faith in complying with article 11 on schedule. Such insistence seems to efface the distinctions between aggressor and the target of aggression. For its part, Ukraine invokes the sequence of military and political measures foreseen in the Minsk Two armistice.

There, the steps to be implemented first are: pullback of heavy artillery and missile systems to certain stipulated distances; ceasing combat operations or attempts to shift the armistice lines; and unhindered access for the Organization for Security and Cooperation in Europe’s (OSCE) Special Monitoring Mission to verify compliance with those clauses. Their implementation, however, is far from complete. Russian and proxy forces persist with low-intensity combat and intensive forms of training for offensive operations, so as to wear down and coerce Ukraine into political concessions.

Berlin, Paris, Brussels and even Washington lack the means or the will to deal with that situation on the ground. Instead, they have taken to urging Kyiv to implement political clauses first, irrespective of Russia’s noncompliance on the military side; thus reversing the Minsk sequence and canceling even the pretense of reciprocity. Their policy can be described as “Minsk revisionism.” This generates concentric pressures on Ukraine, essentially to legitimize the Donetsk-Luhansk authorities through direct negotiations on political and constitutional issues.

In late June, in Brussels and Kyiv, the European Commissioner for Neighborhood and Enlargement, Johannes Hahn, and another top-ranking EU official (unnamed, but identifiable) sounded out Ukrainian politicians about a “mild re-negotiation of the Minsk agreement’s terms.” Kyiv was advised to move proactively with Donetsk and Luhansk on their special status, “run ahead” with constitutional reform, demonstrate political flexibility to disprove criticisms from Russia—all this despite the opposite side’s noncompliance with the military aspects of the armistice (Serhiy Sydorenko, “Minsk Version 2.5,” Yevropeyska Pravda [supplement to Ukraiynska Pravda], June 24, 25).

Similarly, Ukraine is being urged to agree with Donetsk-Luhansk on local elections to be held there (Minsk armistice, article 4), on constitutional reforms with a special status for Donetsk-Luhansk (article 11), and on the transfer of social payments into the budgets of those authorities (article 8 of the armistice)—even as the agreement’s articles 1, 2, and 3 on ceasefire and military disengagement are not being implemented.

The clock ticking toward the December deadline inspires Western politicians to reverse the Minsk sequence—or simply to skip the military clauses 1, 2 and 3 in order to move to the political clauses. Many Western officials are fearful that failure to wrap up a political settlement by December could free Russia to “escalate” again the military hostilities (worst case). Or, alternatively, it will show Western diplomacy to have failed by staking too much on the Kremlin-drafted Minsk agreement, without a Western plan B. Hence the tendency to rush Ukraine into political concessions, essentially skipping the implementation of the military clauses from the Minsk agreement, all at Ukraine’s expense. 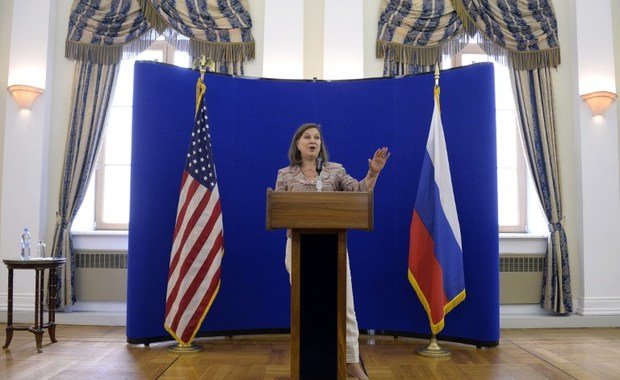 Back
The Air Tragedy That Condemned Putin’s..Next
Crimean Government Indicates It Wants Gr..

On September 29, the Jamestown Foundation held a virtual webinar... END_OF_DOCUMENT_TOKEN_TO_BE_REPLACED

An August 25 article in The New Arab quotes Jamestown Senior Fellow Sergey Sukhankin regarding Russia’s continued interests in Libya and how it uses private... END_OF_DOCUMENT_TOKEN_TO_BE_REPLACED

One year after the capture of Mosul on June 9, 2014, the militant movement known as the Islamic State has become one of the world’s most widely known terrorist organizations. The rise of this jihadist group has set off shock waves in Western capitals as the militant movement declared... END_OF_DOCUMENT_TOKEN_TO_BE_REPLACED