Ukraine wants the Organization for Security and Cooperation in Europe (OSCE) to consider deploying an international, armed police mission in the secessionist Donetsk-Luhansk territory. The declared rationale is to provide security for “elections” that might be staged in that territory under the Minsk armistice—elections that Ukraine deems illegitimate from the outset. The implied rationale, however, is to provide at least the modicum of an international armed presence in this territory, where Russia and its local proxies hold the monopoly on military presence and policing (see accompanying article).

Kyiv’s idea presents the OSCE with the chance of its lifetime; indeed with a new lease on life for a moribund security actor. The OSCE has been involved for almost 25 years in the “grey zones” of Europe’s East, laying claims to multiple roles in “early-warning, conflict-prevention, crisis-management, and post-conflict rehabilitation” (Auswartiges-amt.de, February 29). Yet, the OSCE is hardly known for having sent early warnings of military aggression, nor prevented a conflict, ran a crisis-management (i.e. peacekeeping) operation, or made a difference on post-conflict rehabilitation anywhere in the OSCE’s areas of responsibility, including Georgia, Moldova and now Ukraine. What better chance, then, for the OSCE to prove its relevance at last by taking up Ukraine’s proposal for an armed police mission in Ukraine’s east.

And what better chance for Germany’s Foreign Affairs Minister Frank-Walter Steinmeier, chairing the OSCE in 2016, who listed the OSCE’s four claims as security actor (see above), to advance the Ostpolitik concept of “cooperative security” with Russia via the OSCE, in this case in Ukraine’s east. To “cooperative security” promoters in Germany and elsewhere, the OSCE provides a framework and model, and the conflict theaters in Europe’s East a testing ground. Where the OSCE is in charge, Russia’s veto power inside the organization necessitates Western compromises with Russia.

Indeed, when Ukraine first requested an OSCE police mission in the “Normandy” group’s ministerial meeting (Russia, Germany, France, Ukraine) in March, Steinmeier agreed that the OSCE would draft a concept for such a mission, with the acceptance and inputs of the “parties to the conflict,” i.e. Kyiv co-equally with Donetsk-Luhansk. At that point in time, Steinmeier insisted on those “elections” to be held “by June at the latest” (see EDM, March 11).

Since then, the OSCE has apparently insisted on linking the possibility of such a police mission strictly with the conduct of “elections” in Donetsk-Luhansk. Both matters are being discussed in the Minsk Contact Group (Ukraine, Russia, Donetsk, Luhansk, OSCE). The logic of the OSCE’s response to Kyiv seems to be, for now: “no elections, no police mission.” In this spirit, Kyiv is being asked to agree with Donetsk-Luhansk on the law on elections in that territory as a first step. Conditional on this, the OSCE would then authorize the deployment of a police mission. And, rather than a police mission of the OSCE as such, Kyiv is being asked to consider a trilateral mission with equal contingents of OSCE-mandated police, Ukrainian police, and Donetsk-Luhansk “people’s militias,” as reported by Ukrainian representatives in the Minsk Group (Segodnya, April 18).

This matter is only being discussed informally at the OSCE’s headquarters in Vienna.

Mandating such a mission would require the consensus of all 57 participant states, i.e., is subject to Russia’s veto. An armed police mission—as Ukraine proposes—would be unprecedented for the OSCE. The organization would have to determine the mission’s manpower numbers, types of arms and vehicles, the geography of the mission’s deployment, rules of engagement, duration, financing, and the rules of personnel selection.

Whether the armed police mission would constitute a new OSCE “field presence,” or an expansion of (addition to) the OSCE’s existing Special Monitoring Mission (SMM), is also unclear. While the proposed police mission would “provide security” and use arms if necessary, the SMM is not mandated to provide security. It is, instead, an observer mission, unarmed and comprised of personnel with civilian status on this mission (although some are former military or police officers).

Russian President Vladimir Putin takes the position that any OSCE armed police mission should supplement the SMM to monitor the ceasefire and be deployed along the demarcation line (not within the Russian-controlled territory); but this position might change, as the discussions are only in an early stage (Interfax, April 15; see accompanying article).

The OSCE as an institution and its incumbent German chairmanship have not yet clarified the order of their priorities in this matter. Ukraine has offered them a chance to rehabilitate the OSCE and demonstrate its relevance by mandating a viable police mission in the Russian-controlled territory, to operate independently of Russia or the Donetsk-Luhansk authorities. Alternatively, the German chairmanship might use its influence to push for a hybrid mission, structurally hostage to Moscow and Donetsk-Luhansk. The decision and its operationalization would take time in either case. Neither of those two possible decisions would add credibility to “elections” in the “people’s republics.” And the OSCE would be further discredited if political influence prevails on its election observers to validate those “elections,” if held. 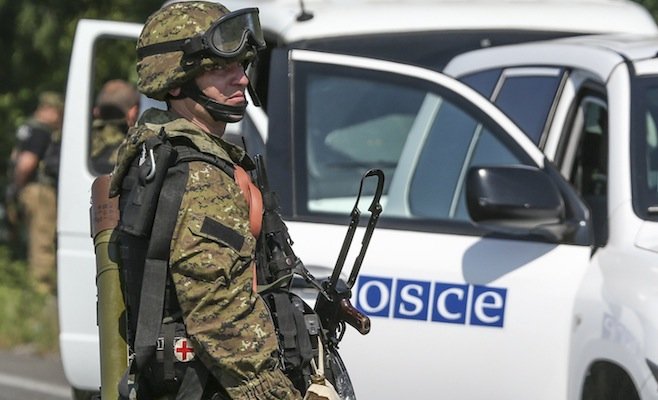