Late on July 10, the head of Abkhazia’s Central Electoral Commission, Batal Tabagua, admitted that a mere 0.99 percent of registered voters had cast a ballot in the referendum on holding early presidential elections in the republic (Gazeta.ru, July 10). The referendum in Abkhazia reflected a political crisis that has been brewing in the breakaway Georgian republic for months. The opposition demanded that the authorities postpone the referendum until the fall, but Abkhazia’s President Raul Khajimba refused (Gazeta.ru, July 10) and the opposition boycotted the vote. The opposition initiated the referendum on holding early presidential elections in Abkhazia, but then complained that the authorities scheduled the ballot too early for them to engage in a meaningful public campaign (Kavkazsky Uzel, July 9).

Abkhazia’s political crisis escalated on July 5, when protesters stormed the Ministry of Interior building in the capital Sukhumi, demanding that Interior Minister Leonid Dzapshba resign and the referendum be postponed (Lenta.ru, July 5).

After the protesters nearly broke into the building, Khajimba promised to suspend Dzapshba, about whom the opposition had several complaints. First of all, Dzapshba was recorded calling on his subordinates to do everything they could to sabotage the referendum. The voice recording was posted on Abkhazian websites. Second, the Ministry of Interior prevented the opposition from congregating in one of the venues in Sukhumi, which prompted them to move their meeting to the interior ministry building. Third, Abkhazia’s opposition claimed that the territory had become much more crime-ridden during Dzapshba’s tenure (Gazeta.ru, July 7).

Amtsakhara, an organization of veterans of the 1992–1993 Georgian-Abkhaz war, is reportedly the main driving force behind the protests. During the previous political crisis in May 2014, Amtsakhara supported the then-president of Abkhazia, Alexander Ankvab. However, Ankvab lost the standoff and stepped down. Soon afterwards, Khajimba was elected president. Khajimba was employed by the KGB during the Soviet period and likely retained a strong connection to the Russian security services. So it is not surprising that Moscow repeatedly supported Khajimba’s candidacy in Abkhazia’s presidential contests, which he invariably lost until 2014. Now, it appears that Moscow’s support for Abkhazia and its regime has faltered due to Russia’s economic crisis. The economic hardship that many Abkhazian families are experiencing has emboldened the Abkhazian opposition and resulted in public protests. Moscow chose a strategy of making promises and consistently failing to fulfill them. The Kremlin has promised to annually invest in Abkhazia the equivalent of about $100 million, which is a substantial amount of money for an impoverished republic with an estimated 250,000 inhabitants. Each year, however, the promised investment has been significantly slashed by the Kremlin (Kavkazskaya Politika, April 1).

Moscow officially recognized Abkhazia and South Ossetia as independent states in August 2008, after a brief military conflict between Russia and Georgia. No other significant international players recognized the two breakaway Georgian regions, which have remained entirely dependent on financial and military support from Russia.

Khajimba apparently came to power promising that, as “Moscow’s man,” he would be able to secure significant Russian investment. However, after his surprise ascent to power in 2014, Khajimba failed to deliver, due to Moscow’s inability to deliver on its promises. Besides the economic crisis, Western sanctions and foreign policy gambles have drained Russia’s budget. Meanwhile, the Kremlin apparently has not been entirely satisfied with Khajimba’s performance as Abkhazia’s leader. For example, the Khajimba government refused to remove restrictions on non-Abkhazian citizens who want to buy real estate, which apparently put off many individuals among the Russian elites.

Days after the storming of the interior ministry building, Moscow hurriedly allocated the equivalent of $15 million for Abkhazia, indicating that Russia still wants to prop up the Khajimba regime and has the resources to do so (Gazeta.ru, July 8). However, Abkhazia’s economy may still be badly hit due to the political instability there. The breakaway region is highly dependent on tourism revenues that come primarily from Russian tourists. Following the riots in the republic on July 5, foreign tourists reportedly started leaving (Gazeta.ru, July 6). At the same time, Abkhazia’s opposition has threatened to “disregard the tourist season” and continue its protests if Khajimba does not listen to them (Gazeta.ru, July 7).

Long-time regional experts like Anton Krivenyuk say that the developments in Abkhazia are fundamentally driven by the deepening economic and management crisis. Abkhazia is becoming increasingly fragmented, and its citizens have little to no hope that the republican economy will improve in the foreseeable future (Kavkazskaya Politika, June 19).

Abkhazia’s relative political stability has depended to a great extent on Moscow’s financial support. However, Moscow’s ability to fund Abkhazia is evidently waning, which is creating political tensions in the republic. While Russia still seems to be in a position to continue funding Abkhazia, its financial resources for the near future will remain tight and may continue to plummet. This development likely portends that the political turmoil in the Georgian breakaway republic will also continue, if not worsen in the months ahead. 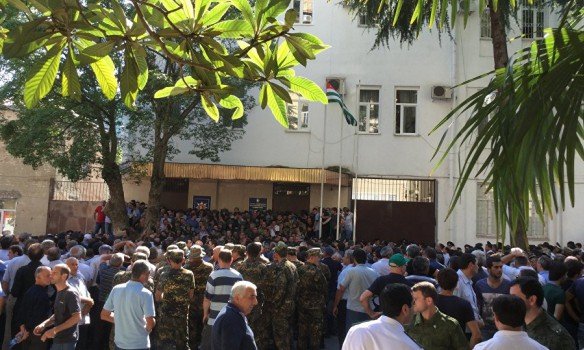