The end of June 2016 featured two noticeable events that might alter Russian posture in the Baltic Sea region: Moscow resurrected its threats to deploy Iskander-M ballistic missiles to Kaliningrad oblast, and the Russian high command carried out an unprecedented in Russian history “decapitation” of the Baltic Sea Fleet (see EDM, July 6). At first glance, these two developments appear weakly connected and even contradictory. However, taken together they highlight the genuine nature of Russia’s current stance in the Baltic and its overall vision for the region.

On June 25, the former commander-in-chief of the Black Sea Fleet and the current chairman of the State Duma’s Defense Committee, Vladimir Komoedov (a member of the Communist Party of the Russian Federation), admitted that the westernmost Russian region of Kaliningrad may, “in the short term,” be equipped with Iskander-M ballistic missiles as a response to the North Atlantic Treaty Organization’s (NATO) activities in the Baltic region (Interfax, June 25). Also, Komoedov noted that the Baltic Sea Fleet (based out of the port of Baltyisk, Kaliningrad) is likely to receive a large landing craft, Alexander Gren, and other types of advanced weaponry. Furthermore, he firmly stated that Kaliningrad is a Russian “outpost” in the Baltic that is being “encircled” by NATO forces. According to the high-ranking parliamentarian, Kaliningrad oblast’s military potential should be dramatically increased so that it can stand up to this threat from the North Atlantic Alliance.

This statement did not appear out of nowhere. On June 15, Major-General Leonid Ivashev, a vice president at the Moscow-based Academy on Geopolitical Affairs, called on Russian authorities to install BM-30 Smerch heavy multiple rocket launchers along with other types of precision-guided munitions, aviation and cruise missiles in Kaliningrad (Kaliningrad.ru, June 15). Before that, on June 5, the first deputy chairman of the Defense and Security Committee of the Federation Council, Frantz Klintsevych, accused NATO of preparing to deliver a “global strike” against Russia via the Baltic States, Romania and Poland (Interfax, June 5).

Andrei Krasov, a Russian Airborne Troops colonel and a Hero of the Russian Federation, reiterated the possibility of Iskanders being sent to Kaliningrad, also adding Crimea to the “list” of potential sites of deployment (Interfax, June 23). Speaking about the missiles in Kaliningrad, Krasov boasted that nuclear warheads on the Iskander would be superfluous, predicting that the “enemy could be beaten with conventional weaponry.” He also made an allusion to the defeats suffered by Adolf Hitler and Napoleon Bonaparte on Russian soil. Colonel Krasov’s remarks (including his ever-popular allusion to the experience of the Great Patriotic War—i.e., the Soviet Union’s fight against Nazi Germany during World War II) were likely not a rhetorical improvisation. Rather, his comments were probably designed to echo President Vladimir Putin’s speech delivered on June 22 (the day of the German invasion of the Soviet Union, in 1941). On this carefully chosen date, Putin demanded that “all necessary steps must be taken in light of NATO’s aggressive [sic] behavior close to Russia’s borders” (Interfax, June 22). Yet, the Russian leader failed to mention Russia’s own actions in Ukraine, the unlawful annexation of Crimea, and a threefold growth in military expenditures over the course of his tenure as president.

The renewed discussion of Russian missiles in Kaliningrad by the country’s top officials has revitalized the debate on this topic in the domestic expert community as well. Mikhail Barabanov, the editor-in chief of the Moscow Defense Brief magazine, claims that Iskander-M complexes will be deployed in Kaliningrad by 2019, as a replacement for the smaller Tochka-U system. Ivan Konovalov, from the Center for Analysis of Strategies and Technologies (CAST), believes that the deployment of Iskander-Ms to Kaliningrad is “utterly probable” (Delfi.lt, June 24). Whereas, the Lithuanian Ministry of Foreign Affairs has stated that the redeployment of Iskanders to the Russian western exclave is still only in its planning stages within the Kremlin (RIA Novosti, July 3).

All that said, certain crucial conclusions can be drawn. First, ever since the Livonian War (1558–1583), the Baltic Sea region has been a high priority for Russian imperial ambitions, which are currently rising to new levels. The planned further militarization of Kaliningrad strongly suggests Moscow is determined to turn the Baltic Sea into its “mare nostrum”—with the help of the Baltic Sea Fleet and increasing military presence in its so-called “border regions.”

Second, Kaliningrad is a recurring point of military pressure on European countries. Judging by escalating rhetoric coming from Moscow, this western oblast’s capabilities are likely to be beefed-up in the short to medium term. In spite of its size, this “Russian island” could easily be transformed into a formidable militarized fortress, replicating the experience of the Soviet period. The installment of Iskander-M missiles (along with other advanced military equipment that could supplement the units and materiel already present) in Kaliningrad, in addition to Russian military activities in Crimea, creates an “arc of pressure” stretching from the Black to the Baltic Sea. Under these circumstances, the formidable deployed weaponry (with an estimated kill zone of up to 500 kilometers) would threaten a strategically vital area stretching from the Baltic Sea toward the Czech Republic and Ukraine.

Third, by constantly emphasizing “isolationist” and “militaristic” rhetoric when speaking about Kaliningrad, Russian authorities are artificially excluding this exclave from the dynamically developing Baltic Sea Rim (Interfax-AVN, June 25) and turning the oblast into a regional “scarecrow.” This tendency once again corroborates a grim reality: Kaliningrad (and its population) continues to be a “pawn” in the hands of Russia’s political-military top brass and remains a “geopolitical hostage” of the Kremlin’s aggressive adventurism.

Fourth, even though Russian elites are demonstrating self-confidence and a dismissive attitude regarding NATO’s regional activities, this outward façade may not fully reflect the actual state of affairs. Indeed, it is notable that the issue of the deployment of Iskander-M complexes to Kaliningrad had reemerged on the eve of the NATO summit in Warsaw (July 8–9), which was all along expected to underscore the Alliance’s instrumental role in Central and Eastern Europe (Kresy.pl, June 10). Evidently, the rhetoric out of Moscow is meant to both frighten and divide NATO member states regarding the perceived level of threat coming from Russia.

Together, these developments signify mounting tensions in and over the Baltic Sea region. And if left unchecked, the Kremlin’s ambitious projects and aggressive determination may lead to a further worsening of the situation. 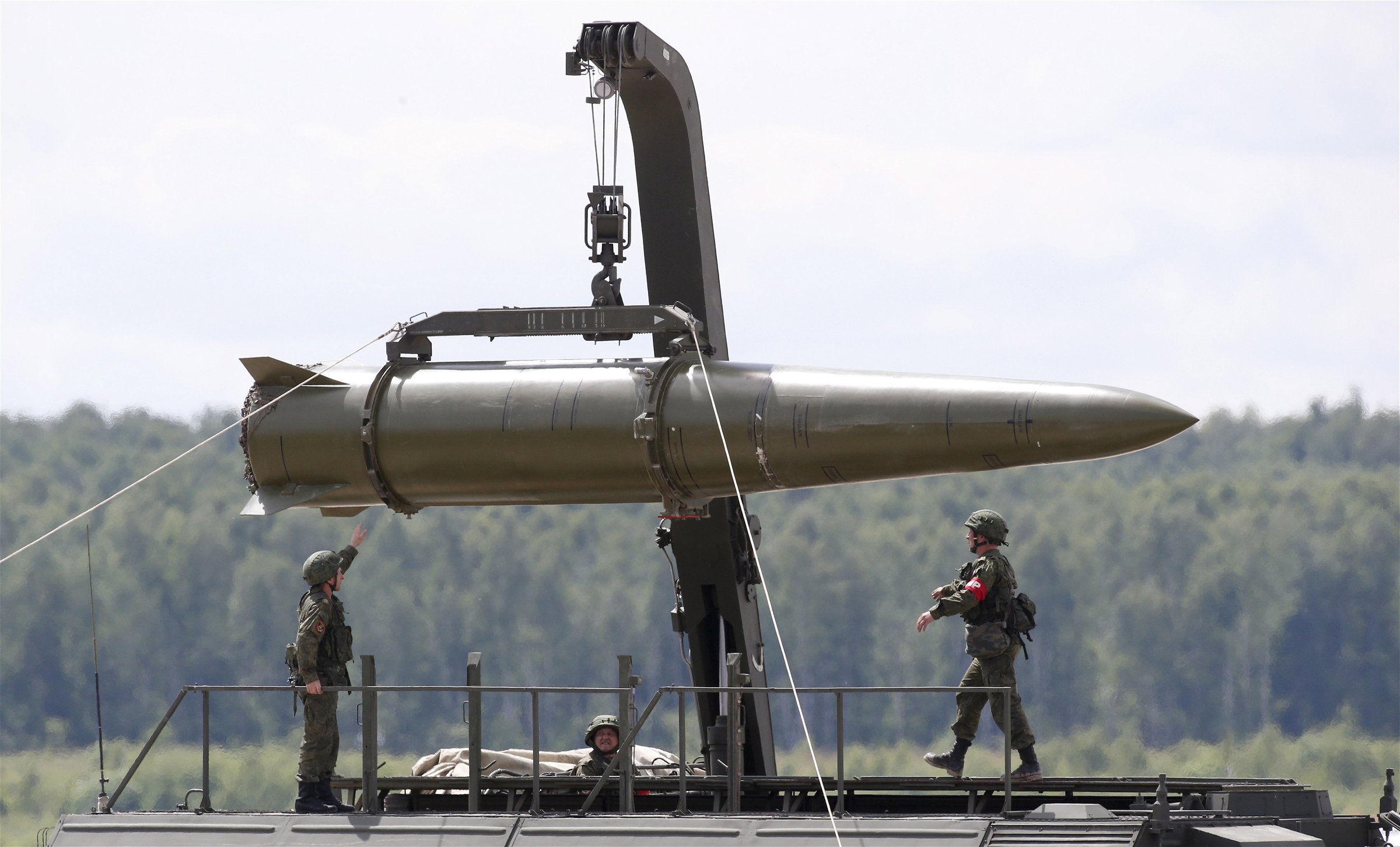 Back
From Assurance to Deterrence: The Russia..Next
Political Turmoil Erupts in Abkhazia as ..