No region of the Russian Federation has a greater number of young men who could qualify to serve in the Russian military than does the North Caucasus, the combined result of rapid demographic growth and the absence of a Russian military draft there for most of the last 20 years. Chechen officials say there are 86,000 young Chechens ready and able to serve. While in many ethnically Russian areas, officials are struggling to meet their draft quotas (Kasparov.ru, April 14).

Nor does any Russian region have a leadership more committed to the idea that having their young men serve in the military is a good thing. Indeed, North Caucasian leaders tend to see this not only as a solution to massive unemployment but also as a means of integrating the restive region into the rest of the Russian Federation. The heads of Chechnya, Dagestan and Ingushetia have all campaigned for a revival of the draft for those reasons as well as to demonstrate their personal loyalty to the Kremlin (see EDM, September 25, 2014).

But the restarting of the Russian military draft in the republics of the North Caucasus over the last two years is, at times, sparking resistance among the population there, leading many young men to go into hiding or even to join militant groups rather than to serve. Reports are even beginning to proliferate that the draft could be suspended in Chechnya.

Two years ago, Moscow ended its post-Soviet-era policy of not drafting North Caucasians, a policy it had first begun to impose during the Chechen wars at the insistence of the military, concerned about ethnic conflicts within the services and about the risks of providing military training to people who might use those skills against Russian forces in the field (see EDM, July 10, 2012). Vasily Tonkoshkruvo, the head of the section of the Russian General Staff responsible for manpower, announced in April 2014 that there would no longer be any “limitations” on the number of Chechens, Ingush and Dagestanis who may be drafted. Instead, they would be treated just like everyone else (Bigcaucasus.com, April 2, 2014).

While there is no indication that Russian commanders were in favor of this change, political leaders in both Moscow and the North Caucasus recognized that the previous policy of excluding North Caucasians from the draft was counterproductive in at least three ways: First, the earlier policy suggested that Moscow did not view them or their region as fully equal to any other Russian locale, which made their integration more difficult. Second, it infuriated many ethnic Russians who resented the fact that their sons had to serve while North Caucasians did not, exacerbating anti-Caucasian attitudes at home. Meanwhile, this angered many North Caucasians, who found themselves excluded from jobs in the security services that require military backgrounds (see EDM, November 4, 2015). And third, this policy made it increasingly difficult for Moscow to meet its draft quotas because of the ever-smaller draft-age cohorts among ethnic Russians.

But now that Russia has begun to draft North Caucasians again, it has faced problems not only within the Russian army, where ethnic tensions remain high (see EDM, November 20, 2014), but also in the North Caucasus republics themselves, where the Russian draft is turning out to be as unpopular—or even more so—than it is in Russian regions.

In Chechnya, rumors have been circulating that the Russian military will cancel the draft there. The authorities in Grozny have disputed such assertions, but in ways that suggest there is local opposition to service in the Russian Armed Forces and anger about Moscow’s continuing discrimination against Chechens. Akhmed Dzhairanov, the republic’s military commissar who oversees the draft, implied as much when he said the rumors were incorrect, that 500 Chechens were already serving in the military, and that the draft in Chechnya should take in not that number but rather “tens of thousands,” because so many young men had not had the chance to serve earlier. Were that to happen, Moscow would meet its draft quota easily; but it would likely face other problems with Chechens and with Russians (Newizv.ru, April 12).

Meanwhile, in Dagestan, the military commissariat announced that the Russian military would take in approximately 1,800 young Dagestanis in the spring draft, a third more than it had drafted a year ago. But as the draft has returned and is now expanding, the Makhachkala commissariat pointed out that so, too, has resistance. At present, and despite the enthusiastic support for the draft by Dagestani leaders, “more than 2,000” men subject to the draft cannot be found: they have fled their homes, and it is entirely possible that they have joined the anti-Russian underground (Vestnik Kavkaza, April 5).

Such reports suggest that Moscow is going to have to move cautiously in re-extending the draft in the North Caucasus lest it provoke what it most fears—a new round of violent resistance to Russian rule across that region. 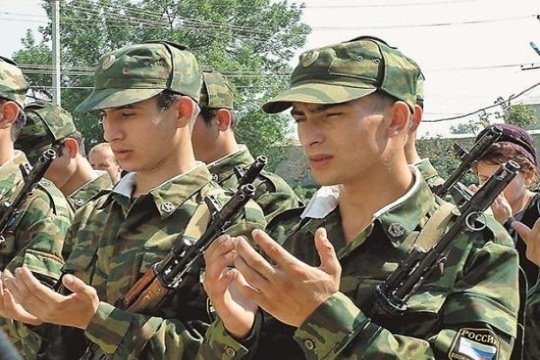