Backed by Russian airstrikes, the Syrian Arab Army (SAA) has in recent months renewed a military campaign to recapture the strategic city of Palmyra from the Islamic State (IS) (Al-Bawaba [Palmyra], March 15; Al-Alam [Tehran], March 15), one that will continue in spite of Russia’s announcement this month that it is pulling back the “main part” of its military forces in Syria.

While IS has maintained territorial control throughout most of eastern Syria, it is losing territory on the borders of its declared Caliphate in Raqqa, al-Hasakah, and Homs governorates. Successfully re-capturing Palmyra and the areas around it – which are rich in natural gas – would be a powerful symbol of the resurgence of the SAA and its auxiliary forces. Although control over the natural gas resources is important for the Assad government – especially in order to provide fuel for the overworked, regime-controlled electricity grid in western Syria – victory there would deny IS what was arguably the Salafist militants’ most high-profile victory last year, and land a significant blow against the group.

IS captured Palmyra in May 2015. Since then the SAA has mounted a slow and steady campaign to retake the city and its surrounding area, including the key town of al-Sukhna, which lies approximately 70km northeast of the city (All4Syria [Palmyra], March 11; Sputnik News [Palmyra], March 7). Palmyra is the largest and most important city in the al-Hamad region of Syria’s badia, the arid, semi-desert area that stretches from Syria’s southeastern borders with Iraq and Jordan to the Euphrates River and on to the eastern areas of several of the country’s western governorates. It also sits on the important east-west M20 highway that provides vital supply lines for SAA forces in southeastern Syria’s Deir al-Zor governorate (Shaam Times [Damascus], July 4, 2015; Shaam Times [Damascus], October 31, 2014; Al-Safir [Beirut], July 23, 2014). [1]

The al-Hamad region is an important staging point for a military campaign against IS in Deir al-Zor, although its remote and relatively desolate terrain makes its most highly populated areas in and around Palmyra and al-Sukhna particularly difficult to control. [2] Currently, IS, the Assad government, and the U.S.-led coalition are competing in the region for the loyalty of the local population. That region includes al-Hamad, and the more fertile Euphrates River valley region that runs from the northeastern areas of Aleppo governorate down through the IS ‘capital’ of Raqqa, and into the Syrian-Iraqi border region near the city of Deir al-Zor. The population in these areas is composed mostly of Sunni Arab tribes (Terrorism Monitor, December 19, 2014).

The tribes are pragmatic, shifting their loyalties over the course of the civil war depending on the state of the conflict. Until it is displaced, IS remains the most powerful actor in this region of Syria and, as a consequence, the level of the local tribes’ opposition to it is reduced (Terrorism Monitor, December 19, 2014).

A fundamental component of the IS strategy throughout Syria is to crush internal armed opposition, including suspected Assad government sympathizers, and to promote and secure the peaceful allegiance of Sunni Arab tribes in each locality it seizes (Enab Baladi [Deir al-Zor], October 18, 2015; Terrorism Monitor, December 19, 2014). IS has ensured aggressive media coverage of the tribes that pledge allegiance to it, including the local, tribal population of al-Sukhna, which was subsequently renamed Um al-Qura by IS in July 2015 (Syrian Observatory for Human Rights [Deir al-Zor], January 21; Enab Baladi [Al-Sukhna], July 23, 2015).

While IS currently holds sway over the local Sunni Arab population of the al-Hamad region and the Syrian-Iraqi border area around Deir al-Zor, the SAA is in a comparatively better position than the U.S.-led coalition to tackle the challenge; this is due largely in part to the SAA’s developing campaign in the western suburbs of Palmyra and its military airbase in the city of Deir al-Zor (MLM Briefs, November 30, 2015; Terrorism Monitor, December 19, 2014). The SAA’s forward operating base in Deir al-Zor is the center of gravity for the Assad government’s efforts to establish a resistance force – a kind of Syrian sahwa movement – against IS (Baladi News [Deir al-Zor], March 10; MLM Briefs, November 30, 2015; Arabi 21 [Deir al-Zor], November 5, 2015). Those efforts are constrained, however, by the local population’s resistance to the continued rule of the Assad government, and the SAA continues to struggle with reserve manpower, limiting its ability to project power in Deir al-Zor governorate (MLM Briefs, November 30, 2015; ARA News [Deir al-Zor], August 13, 2015; Enab Baladi [Deir al-Zor], August 6, 2015).

The U.S.-led coalition has also been attempting to build an armed tribal resistance movement in the area over the past year, aided in particular by Jordan (MLM Briefs, December 31, 2015; Al-Arabi Al-Jadid, July 5, 2015; Al-Arab [Amman], June 15, 2015). The Hashemite kingdom is primarily concerned with Syria’s badia in the context of stabilizing its northern border with Syria and preventing IS from staging attacks inside Jordan from this sparsely populate, desert region. [3] It is believed that the Jordanians are engaged in two distinct efforts to accomplish this counter-terrorism objective.

The first is to organize an alternative counter-terrorism force within the structure of al-Jabhat al-Janoobiyya (SF-Southern Front), which is a U.S.- and Jordanian-backed moderate Syrian armed opposition coalition active in southwestern Syria since February 2014 (Militant Leadership Monitor, February 28, 2015; Terrorism Monitor, March 6, 2014 ). This force, called Jaysh Ahrar al-Asha’yer (Army of the Free Tribes), though affiliated with the SF, is believed to be a direct proxy of Jordanian intelligence established to prevent the expansion of IS into the Lajat area in northern Dara’a governorate, a front-line against the expansion of IS in southwestern Syria. It was formed in December 2015 from local, moderate armed opposition militias mobilized from among the Sunni Arab tribes, and could have as many as 3,000 fighters (Jordan Zad [Amman], December 3, 2015; YouTube, December 2, 2015). [4]

Since its formation in December 2015, the Army of the Free Tribes has battled IS in Lajat. It has also fought the Salafist organization Harakat al-Muthanna al-Islamiyya (Islamic Movement of Muthanna), a rising armed social movement in Dara’a governorate and a long-term security concern of the Jordanians (El-Dorar Al-Shamiyya [Dara’a], March 11; Al-Khal [Dara’a], January 17). [5]

However, at present, there is no indication that the Army of the Free Tribes is expected to be a compelling force against IS. That role is reserved for another, coalition-supported force, al-Jaysh Sooria al-Jadeed (New Syrian Army).

At that time, many sought refuge in the eastern Qalamoun mountain range on the border of Rif Damascus and Homs governorates (MLM Briefs, December 31, 2015; Terrorism Monitor, August 21, 2015; Al-Akhbar [Beirut], October 16, 2014). It is from this group that the U.S.-led coalition is seeking to build the New Syrian Army into an ethnic Arab, tribally-networked vanguard force. They hope to exploit the group’s preexisting lines of influence among the local tribes in the al-Hamad area, and the more heavily populated areas along the Euphrates River valley. The so-called provinces, newly formed by IS, of al-Khayr (Deir al-Zor and its suburbs) and al-Furat (Albu Kamal in Syria and Qa’im and its suburbs in Iraq) are particular targets for the New Syrian Army. It is hoped they will pressure the remaining IS supply lines from Iraq into Syria. [6] The staging point for this campaign is the al-Hamad area. A series of raids by the New Syrian Army and affiliated militias – including the former Authenticity and Development Front affiliate Jaysh Usuud al-Sharqiyya (Army of the Lions of the East) and the SF-affiliated Quwat al-Shahid Ahmad al-Abdo (The Martyr Ahmad al-Abdo Force) – saw raids on the important al-Tanaf border post on the Syrian side of the Syrian-Jordanian border in early March (Orient News [Deir al-Zor], March 9; All4Syria [Deir al-Zor], March 5).

Although the New Syrian Army has the military support of the U.S.-led coalition, and has a secure base in Jordan for staging operations into al-Hamad, it faces significant recruiting challenges, preventing it from effectively targeting IS and the SAA’s forward operating bases. A stark example of this is the group’s apparent inability to join with the Army of the Lions of the East, a union that would provide 1,000-2,000 additional fighters from displaced members of the FSA and Asala wal-Tanmiya. [7] Until it can recruit additional manpower, the New Syrian Army is likely to continue to operate as a special operations force, conducting raids against fixed IS positions. [8]

Coalition efforts are further constrained by the reality that, in southeastern Syria, the SAA’s campaign to displace IS has potentially important geopolitical outcomes. If the slow moving, SAA offensive is successful against IS, the Assad government could force the coalition and other opposition supporters to acquiesce to its authority over eastern Syria.

Efforts to retake Palmyra are not necessarily a race between Syrian government forces and the U.S.-led coalition. There are reports that the U.S. and Russia could coordinate efforts against IS. That could see the U.S.-led coalition focusing on Raqqa and IS-held areas north of the Euphrates, while the Assad regime and its allies target the Palmyra-Deir al-Zor axis to the south and along the Euphrates to the Syrian-Iraqi border (Al-Arabiyya [Dubai], March 14).

The challenge for the Assad government in the aftermath of displacing IS, however, would be how to hold the newly-seized areas. It is unclear whether enough of the local Sunni Arab tribal population would concede to a return of the regime’s authority. Constrained by manpower shortages, the Assad government would likely be forced to allow the local population significant autonomy in exchange for their loyalty, and still have to devote precious military resources to combatting the return of groups such as the al-Qaeda affiliate Jabhat al-Nusra and its ally, Harakat Ahrar al-Sham al-Islamiyya, in the area. 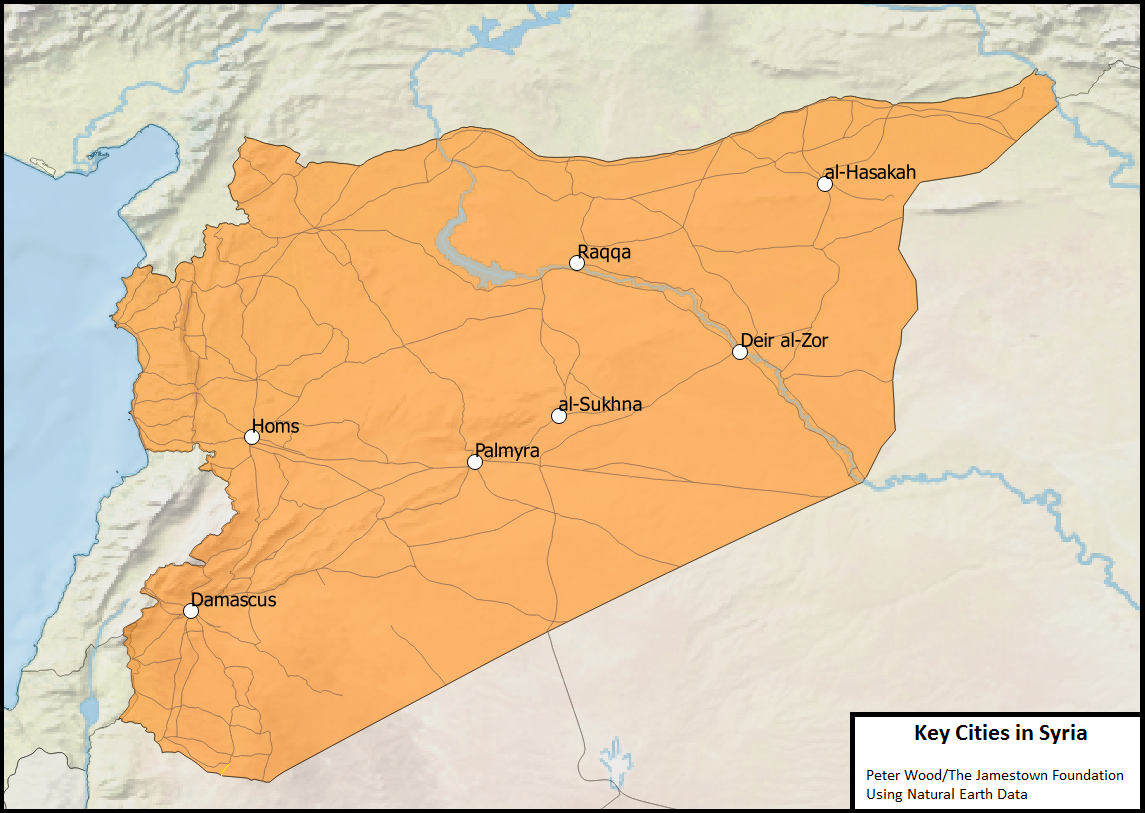 Back
The Ben Guerdane Attack and Tunisia’s ..Next
Finland Raises Terror Alert as Jihadist ..

On August 4, the Jamestown Foundation held a webinar  on... END_OF_DOCUMENT_TOKEN_TO_BE_REPLACED

Jamestown Senior Fellow Margarita Assenova was featured in an event with the New Lines Institute for Strategy and Policy on Capitol Hill. The event was... END_OF_DOCUMENT_TOKEN_TO_BE_REPLACED

In this “Special Report on The Syrian Uprising: A Focus on Parties and Leadership” we examine the roles of key religious, military, and political actors in the Syrian uprising. This 2012 Quarterly Special Report features five brand-new articles commissioned by The Jamestown Foundation and one highly relevant article from The... END_OF_DOCUMENT_TOKEN_TO_BE_REPLACED