Despite Russia’s economic crisis, which has already imposed restrictions on military spending (see EDM, May 3), the Kremlin is trying to implement a questionable buildup in the Arctic, aimed at strengthening Russian military might. During a recent board session of the Russian Ministry of Defense, Minister Sergei Shoigu paid special attention to the implementation of the “2020 Activity Plan by the Northern Fleet.” He reminded the participants that the Northern Fleet, an “inter-service strategic formation,” was formed over two years ago “in order to protect [the] northern borders of Russia” (Mil.ru, July 27). He mentioned in particular that the construction of “closed-loop” (self-sustaining) military towns will be finished on the Franz Josef Land archipelago and the Novosibirsk Islands in 2016. A joint situational awareness system is being created to support air defense.

The Russian defense ministry intends to build or reconstruct ten airfields in the Arctic. “Russia’s Federal Agency for Special Construction [Spetsstroy] is building military infrastructure facilities on six islands in the Arctic,” Izvestia quotes a ministry official. According to this source, over 100 tons of military equipment for more than 150 facilities are planned to be delivered to these remote military garrisons. In addition to the materiel supply, more than 190 tons of construction materials—including precast concrete, cement, metal, pipes, fittings and equipment—will be delivered to the Arctic for building the facilities (Izvestia, July 11). The construction and renovation of runways and other structures is ongoing at Severomorsk-1 airfield (Murmansk oblast) as well as Nagurskoye air base (Alexandra Land Island, in the Franz Josef Archipelago). The airfields at Rogachevo (Arkhangelsk oblast), Tiksi (Yakutia Republic) and Temp (Kotelny Island in the Arctic Ocean) are also under construction. It was announced that beginning next year, Tiksi is to become the permanent base for a formation of high-altitude MiG-31 interceptors (Rossiiskaya Gazeta, July 19).

Meanwhile, troops deployed in the Arctic are undergoing intensive training. Specifically, units of mobile rapid-reaction forces are being exposed to the conditions of the Far North. During several snap inspection exercises in the past year, the Russian General Staff has concentrated on the ability to reinforce three land-based brigades in Murmansk oblast—the 200th Motorized Rifle Brigade (Pechenga), the 80th Arctic Motorized Rifle Brigade (Alakurtti) and the 61st Marine Brigade (Sputnik)—with airborne units based in Ivanovo and Pskov (western-central Russia) (Mil.ru April 9, 2015).

Over the last decade, the Russian leadership has become obsessed with the notion that climate change will result in the imminent melting of the polar ice cap in the Arctic Ocean. At this point, these politicians argue, Russia will be able to tap a wealth of heretofore inaccessible natural resources, such as oil and natural gas from the seabed. In addition, the role of the Northern Sea Route (which hugs Russia’s Arctic coast) will increase dramatically, providing huge revenues to Moscow from cargo ships allowed to pass through this transit corridor connecting Europe, Asia and North America.

However, climate change is unlikely to bring only benefits for Russia. In addition to polar ice, the Arctic permafrost will also melt. Consequently, a belt of Russia’s northern coast is expected to turn into a swamp many kilometers deep, making it impossible to build the infrastructure necessary to serve the Northern Sea Route or the facilities required to extract the region’s oil and gas. Moreover, the United Nations Convention on the Law of the Sea (UNCLOS) prohibits parties to the agreement from placing restrictions on foreign ships passing along the Northern Sea Route. Thus, Russia (a party to UNCLOS) is obligated to provide passing foreign vessels with communications as well as meteorological, hydrological and rescue services at its own expense. This means that President Vladimir Putin’s dream of cashing in on the route is wishful thinking. Even now, his plans clearly diverge from reality. Transit traffic via the Northern Sea Route has dropped catastrophically: from 1.18 million tons in 2013, to 39,000 tons in 2015 (Regnum, December 8, 2015).

For almost 80 years of this route’s existence, no one had any reason to question its economic viability. Military bases and prison camps were the main destination and departure points along the Northern Sea Route. Now, with transcontinental cargo traffic having collapsed, Moscow’s main hope is that this route will be used for transporting offshore oil. However, all major Western oil companies have so far refused to develop the Arctic shelf: it is too dangerous and expensive. Furthermore, sections of the Northern Sea Route are inaccessible to larger ships. Vessels with a draught of over 12 meters cannot operate in the vicinity of the Novosibirsk Islands, for example (Fni.no, November 8, 1999).

Future prosperity in the Arctic looks highly doubtful, but the Kremlin lives according to a different logic. It believes that the possession of even hypothetical treasures in the Far North will inevitably encourage other countries to forcibly take them from Russia. Therefore, the Kremlin has demanded that the defense ministry “strengthen the battle capability” in the region.

In executing this order, the Russian military is bound to redevelop old Cold War–style scenarios, even though none of the other Arctic-region countries have shown any sign of militarization in recent years. Nearly Russia’s entire military potential in the Far North is currently concentrated on the Kola Peninsula—the extreme west of the Russian Arctic. This was no accident, and it stems from the Arctic region’s role as a zone of military confrontation between the Soviet Union and the United States throughout the Cold War. It was convenient to deliver nuclear strikes against the enemy from the depths of the ice-covered ocean. The main task of all Soviet Armed forces in the Arctic—the naval surface fleet, the air force and ground troops—was to ensure nuclear submarine combat patrols and the protection of their bases on the Kola Peninsula. No one at that time suggested the need to control and defend thousands of miles of ice desert. Surface vessels of the Northern Fleet, in fact, cannot operate east of Novaya Zemlya—beyond this point they lack ground support and air protection. To ensure wide-scale patrols, it is not enough to restore Soviet-era airfields and station there a few dozen jets. Thousands of tons of fuel will also be required. Deploying small garrisons in the Arctic makes no military sense either. Thus, Russia is spending massive resources simply for Shoigu to be able to report to Putin that the country’s unobtainable natural wealth is being protected. 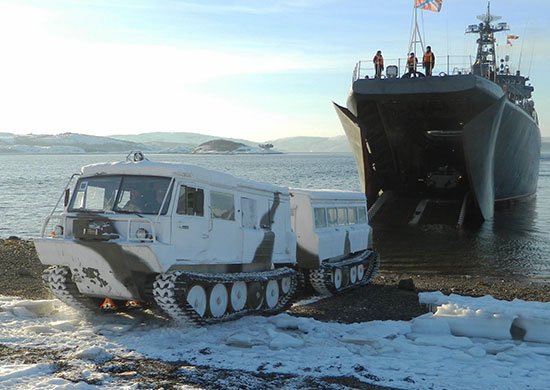 The Jamestown Foundation was proud to host a webinar on... END_OF_DOCUMENT_TOKEN_TO_BE_REPLACED

Jamestown Foundation Analyst Richard Arnold was interviewed by PolitiFact for a story on the Lie of the Year 2022, or Putin’s long list of lies... END_OF_DOCUMENT_TOKEN_TO_BE_REPLACED

By Aleksandr Golts Translated By Maia Kipp   With tensions between Russia and the West at an all-time high, Moscow appears to be preparing for large-scale war. Now more than ever, there is an increased need to understand the past and future directions of Russian military reform and what... END_OF_DOCUMENT_TOKEN_TO_BE_REPLACED