Following the March 22 terrorist attacks in Brussels, which killed over 30 people and injured hundreds, Russian officials responded by calling for unity in opposing the Islamic State (IS). They proposed burying the hatchet on all other issues to concentrate on fighting terrorism. The chair of the Duma foreign relations committee, Alexei Pushkov, spoke about “NATO [the North Atlantic Treaty Organization] fighting a nonexistent Russian threat, while bombs are exploding under its nose in Brussels.” NATO headquarters are not too far from the Brussels international airport, where two bombs went off last Tuesday, in the check-in area. Duma deputies called for better cooperation between Russia and the West on fighting terrorism: “We face a common enemy but are disunited” (Kommersant, March 22). According to Lieutenant Colonel (ret.) Alexi Filatov, the West must study Russian know-how of over 20 years of fighting jihadists and Chechen separatists in the North Caucasus: “The international community and the United States helped us to win the Second Chechen war [in the 2000s] and ensure order in the North Caucasus. Now they are in trouble, and we are ready to share our vast practical experience. Only together we may prevail” (Aif.ru, March 23). Filatov is a security expert and a former special forces member of Alpha, the elite antiterrorist unit of the Federal Security Service (FSB).

Opposing voices also entered the discussion. The flamboyant extreme nationalist politician Vladimir Zhirinovsky, speaking in the parliament, opposed the move by the Duma speaker Sergei Naryshkin to express condolences to the Brussels victims by a moment of silence. In preparation for the upcoming Duma elections next fall, Zhirinovsky is using extreme anti-Western nationalistic rhetoric to ensure his Liberal-Democratic Party (LDPR) receives enough votes to stay in the legislature. According to Zhirinovsky, Westerners have only themselves to blame if they are attacked by terrorists. He added, “I do not know of any instance when a foreign parliament held a moment of silence to commemorate Russian dead—we must act accordingly.” Naryshkin, a close associate of President Vladimir Putin, rebuked Zhirinovsky: “For us, the security of Europe is indivisible” (Mk.ru, March 23)

The formation of a grand antiterrorist coalition has been Putin’s pet idea for some time (see EDM, September 17, 2015; October 29, 2015). Speaking at the United Nations, in New York, last September, just a couple of days before Russian jets began a relentless bombing campaign over Syria to reinforce the regime of Bashar al-Assad, Putin called for the formation of a “broad antiterrorist coalition” and compared it with the coalition against Adolf Hitler, formed during World War II. Despite the call for unity, Putin’s speech at the UN was mostly an attack on the West, which he denounced for causing world-wide chaos by promoting democratic change in Asian and African nations. But the need to counter a common foe must prevail and Putin began his UN address by recalling the 1945 Yalta summit of the “Big Three” leaders of the anti-Hitler coalition—Josef Stalin, Theodor Roosevelt and Winston Churchill. Putin praised the “Yalta system,” which “saved the world from havoc for the last 70 years” (Kremlin.ru, September 28).

In Yalta, in 1945, the “Big Three” carved up Europe into distinct spheres of dominance, leaving Central European nations, which are now members of the European Union and NATO, under the Soviet thumb until the end of the Cold War and the collapse of Communism, in 1991. For those nations and for many in the West, the “Yalta system” of world order is a slur word, but not at all in the Kremlin today. Putin’s proposed new “anti-Hitler coalition” could itself lead to a new Yalta: to a new world order based on the same principles of great powers deciding the plight of lesser nations without their consent or consultation. The Kremlin could even provide the same Yalta premises in freshly annexed Crimea for a new get-together. The Islamic State’s dramatic terrorist attacks in Europe and Russia’s apparent military success in Syria (see EDM, March 17) seem to provide a good background that may induce the West to agree.

It is highly important for the Kremlin to prove, in practical terms, that the principle of concert of great powers works and may help solve complicated international issues. A bilateral concert of the US and Russia—resembling the Cold War superpowers’ dealings—is seen as especially good: it makes Moscow an equal to Washington and creates tensions between the US and its various international allies. The visit this week to Moscow of US Secretary of State John Kerry to hold talks with his Russian counterpart Sergei Lavrov, along with a late night meeting with Putin, is seen as significant. The official Kremlin-controlled media express hope of an emerging understanding between Moscow and Washington, though “any real breakthrough may happen only after a new administration is in the White House next year” (RIA Novosti, March 24).

Moscow is ready to adapt its policies in Syria and Ukraine to accommodate the US, but no compromises on principle are forthcoming. Russia expects the US to rein in Turkey and the Syrian opposition to stay put as al-Assad and other Russian allies in Syria grow stronger and expand their territorial control. Russian special interests and military bases in Syria must be guaranteed. Moscow expects Washington to begin closer military-to-military cooperation in Syria, allowing the Russian Armed Forces still there to use force to compel the Syrian opposition to bow to al-Assad. Russia also expects the US to put more pressure on the government in Kyiv to legalize the Moscow-backed Donbas separatists (Vesti.ru, March 24).

Maria Zakharova, the official spokesperson for the Russian Ministry of Foreign Affairs, told journalists in a TV interview this week that she supports Donald Trump’s assessment of NATO as an organization in crisis (Vesti.ru, March 22). In the future, when a more isolationist administration may take over in Washington (preferably Trump’s), the Kremlin is ready to help the US disentangle itself from the troublesome Middle East and cut back on its international commitments to Europe and NATO as well as other parts of the world. Meanwhile, Russia will seek to expand its presence in all those regions. Russian soldiers fighting in Syria and in Donbas are building the foundation of a new world order and—from Moscow’s point of view—succeeding. 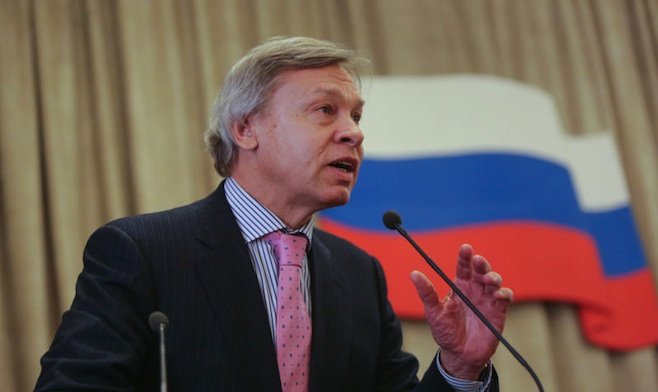 Back
Belarus-Ukraine Relations Beyond Media H..Next
Number of People Registered in Russia as..

The Jamestown Foundation was proud to host a webinar on... END_OF_DOCUMENT_TOKEN_TO_BE_REPLACED

Jamestown Foundation Analyst Richard Arnold was interviewed by PolitiFact for a story on the Lie of the Year 2022, or Putin’s long list of lies... END_OF_DOCUMENT_TOKEN_TO_BE_REPLACED