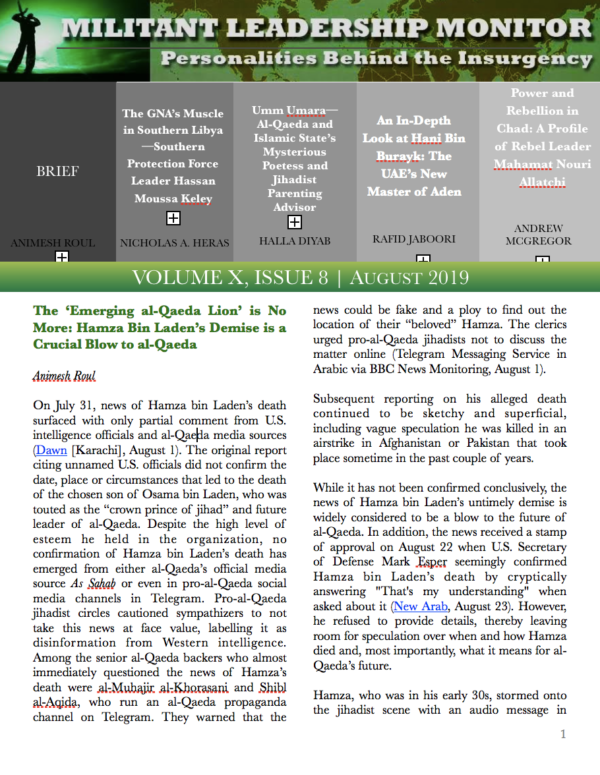 The August 2019 Issue of Militant Leadership Monitor features a brief on the alleged death of Hamza bin Laden, son of Osama bin Laden; an analysis on the “GNA’s Muscle in Southern Libya,” Southern Protection Force Leader Hassan Moussa Keley; an examination of Umm Ummara al-Muhajirah, a jihadist poetess and al- propagandist; an in-depth look at Hani bin Burayk, the deputy head of the Southern Transitional Council, the southern Yemen secessionist group that just took control of Aden; and a profile of the Chadian rebel leader Mahamat Nouri Allatchi, who was arrested in Paris on charges of violating  human rights during his long career as revolting against the government in N’Djamena.

In this Quarterly Special Report (QSR) on the conflict in South Sudan, we focus on the civil wars, border disputes and rivalries between ethnic groups that have resulted in over half a century of violence in the country. The QSR begins with an overview by... MORE
$20.00 – $25.00 Select options
The March issue of Militant Leadership Monitor begins with an update on the efforts of Abu Ayman al-Iraqi, a deputy of ISIS commander Abu Bakr al-Baghdadi, in Eastern Syria. This is followed with a profile of Muhammad Ali Tambako and his expulsion as the vice-chairman... MORE
$20.00 – $25.00 Select options
The December Issue of Militant Leadership Monitor features two briefs by Nicholas A. Heras. The first focuses on the recent announcement by eastern Syrian militant leader Saddam al-Jamal of his change of allegiance from the Free Syrian Army to al-Qaeda. The second brief provides a snapshot of Osama Amin al-Shihabi... MORE
$20.00 – $25.00 Select options
In this Quarterly Special Report (QSR) on Mayhem in Mali, we focus on the various Islamist fighters who have taken over northern Mali. The QSR includes profiles of important personalities in the Sahel region such as Abou Zeid, a brutal, committed and resilient militant under... MORE
$20.00 – $25.00 Select options