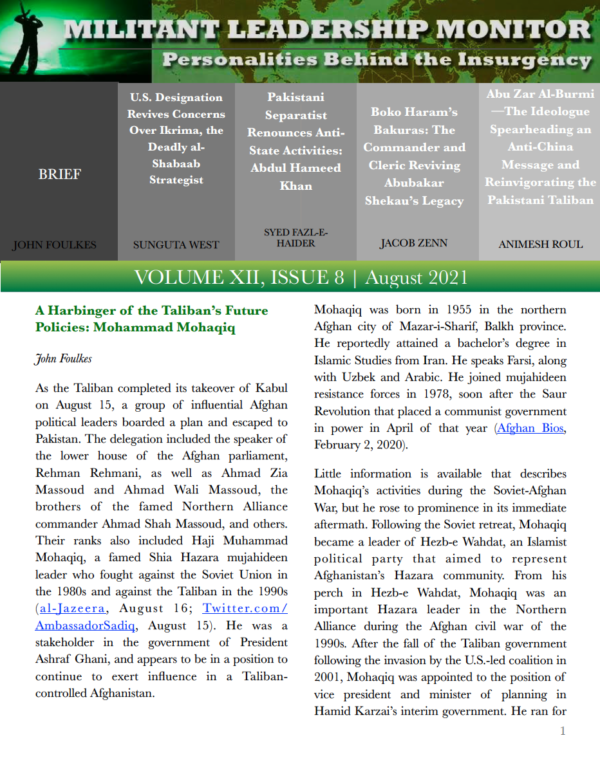 The August 2021 issue of Militant Leadership Monitor features a brief on the Afghan warlord Mohammed Mohaqiq; an examination of Ikrima, an al-Shabaab strategist recently designated a terrorist by the U.S. government; an analysis of Abdul Hameed Khan, a Pakistani separatist who just made peace with Islamabad; an in-depth look at the two Bakuras who rival Islamic State in West Africa Province from their Lake Chad base; and a profile of Abu Zar al-Burmi, an ideologue spearheading an anti-China message and reinvigorating the Pakistani Taliban.

This issue of Militant Leadership Monitor includes profiles of Saudi Arabia's Ahmed Abdullah Saleh al-Khazmari al-Zahrani, AQIM's Jemal Oukacha, Libya's Isa Amd al-Majid, the Niger Delta's al-Haji Mujahid Dokubo-Asari (Part Two), and a look at leaders of Ansar al-Sharia in Tunisia.
$20.00 – $25.00 Select options
In this month's issue of Militant Leadership Monitor, Jamestown analysts have written about militant and criminal underworld figures across the globe. In light of the rising tension between Lebanese Sunnis and Shiites that is being expressed in Syria, Murad Batal al-Shishani drew up a portrait... MORE
$20.00 – $25.00 Select options
This issue of Militant Leadership Monitor includes in-depth portraits of Tripoli's Hussam Abdullah Sabbagh, Hamas Political Bureau Chief Khalid Meshaal, Egypt's Muhammad al-Zawahiri and the Toulouse gunman Muhammad Merah.
$20.00 – $25.00 Select options
In this Quarterly Special Report (QSR) on the conflict in South Sudan, we focus on the civil wars, border disputes and rivalries between ethnic groups that have resulted in over half a century of violence in the country. The QSR begins with an overview by... MORE
$20.00 – $25.00 Select options

The Jamestown Foundation is proud to present a webinar on China’s... END_OF_DOCUMENT_TOKEN_TO_BE_REPLACED

On May 19, Voice of America posted an interview with Dr. Richard Arnold on the topic of Russian Cossacks’ involvement in the war against Ukraine. END_OF_DOCUMENT_TOKEN_TO_BE_REPLACED

Pakistan’s Troubled Frontier is a gripping snapshot of the militants and movements threatening a region plunging into turmoil. This work represents an effort to examine the array of security issues threatening Pakistan’s volatile northwest frontier and should become an important reference for policy makers seeking greater insight into the region.... END_OF_DOCUMENT_TOKEN_TO_BE_REPLACED