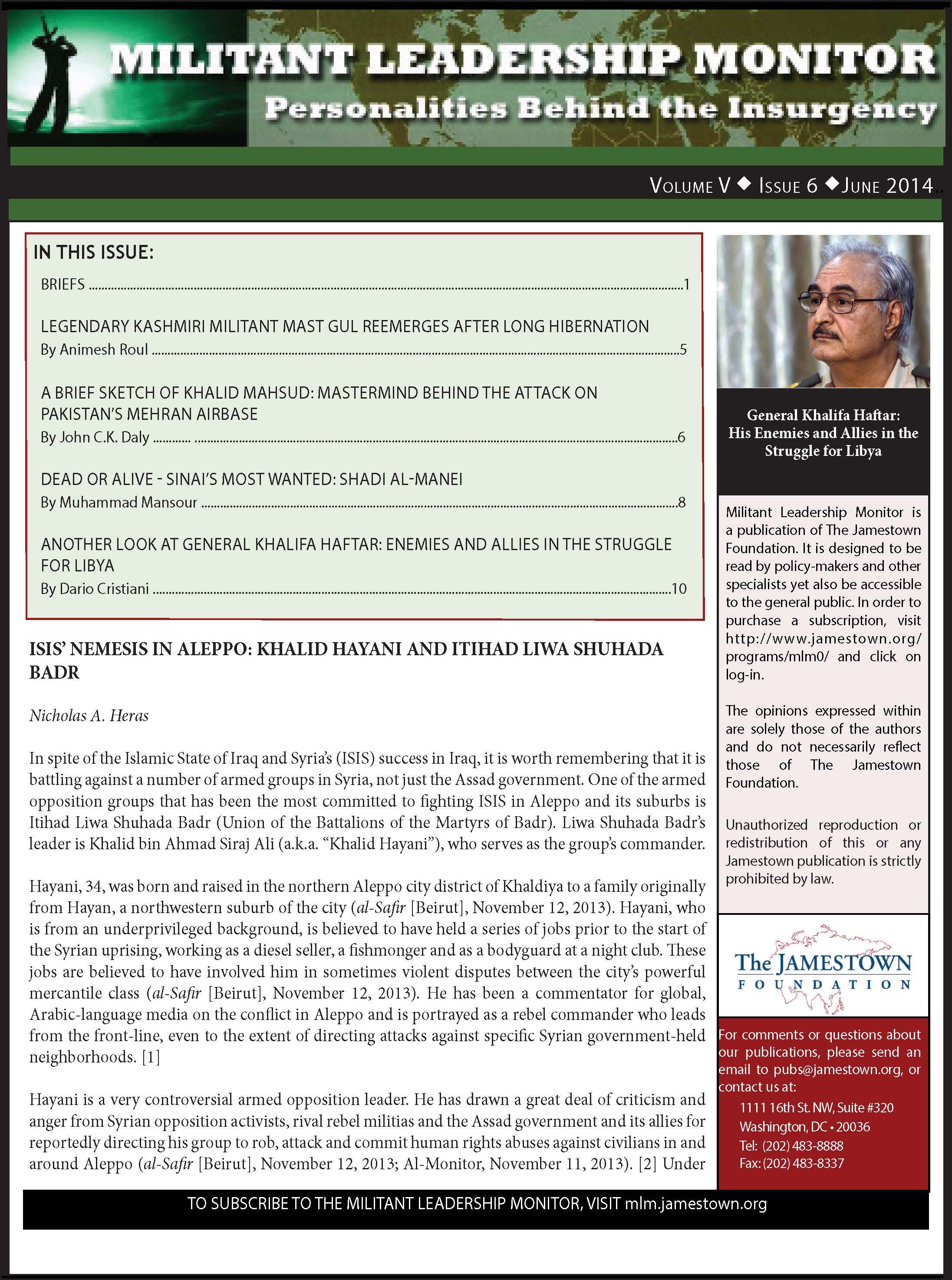 Militant Leadership Monitor’s June issue begins with briefs on two Syrian militants. Khalid Hayani leads Itihad Liwa’ Shuhada’ Badr against ISIS while Harakat Hazm through Abd Allah ‘Awda may be among the first groups to receive direct military assistance from the United States. Following these is an article by Animesh Roul on Mast Gul’s re-emergence on the Pakistani jihadist scene.Next, John C.K. Daly offers a brief sketch of Khalid Mehsud, the leader of the newest splinter group from the TTP, the TTP-South Waziristan. Muhammad Mansour then offers a glimpse of Shadi al-Manei, a leader of Ansar Bayt al-Maqdis who may or may not be dead. Finally, Dario Cristiani updates readers on General Khalifa Haftar of Libya.

This issue of Militant Leadership Monitor begins with a profile by Guy Fricano of Mexico's Miguel Trevino of Los Zetas who is being targeted for character assassination. Arif Jamal provides a portrait of the top LeT ideologue Amir Hamza. In in-depth look at Mallam Muhammadu, the ideological... MORE
$20.00 – $25.00 Select options
This issue of Militant Leadership Monitor includes in-depth analyses of Ansaru's Khalid al-Barnawi, the Niger Delta's al-Haji Mujahid Dokubu-Asari, succession scenarios after Talabani, and the second part of a who's who in the Jordanian Opposition.
$20.00 – $25.00 Select options
The October 2021 issue of Militant Leadership Monitor features a piece on the affirmed death of jihadist Mokhtar Belmokhtar and his legacy of spreading influence of al-Qaeda in the Islamic Maghreb (AQIM) throughout the Sahel; the leadership of Mullah Muhammad Hassan Akhund as the inaugurated... MORE
$50.00 Select options
In this Quarterly Special Report (QSR) on the rise of al-Shabaab, we focus on the various militants who are guiding al-Shabaab, an al-Qaeda-aligned militant organization that aims to impose Shari’a in Somalia. The group began as a radical youth wing of Somalia’s Islamic Courts Union... MORE
$20.00 – $25.00 Select options

The Jamestown Foundation was proud to host a conference on... END_OF_DOCUMENT_TOKEN_TO_BE_REPLACED

On June 6, Jamestown’s President Glen E. Howard was quoted by Task and Purpose in an article on Russia’s Chechen fighters in Ukraine. END_OF_DOCUMENT_TOKEN_TO_BE_REPLACED