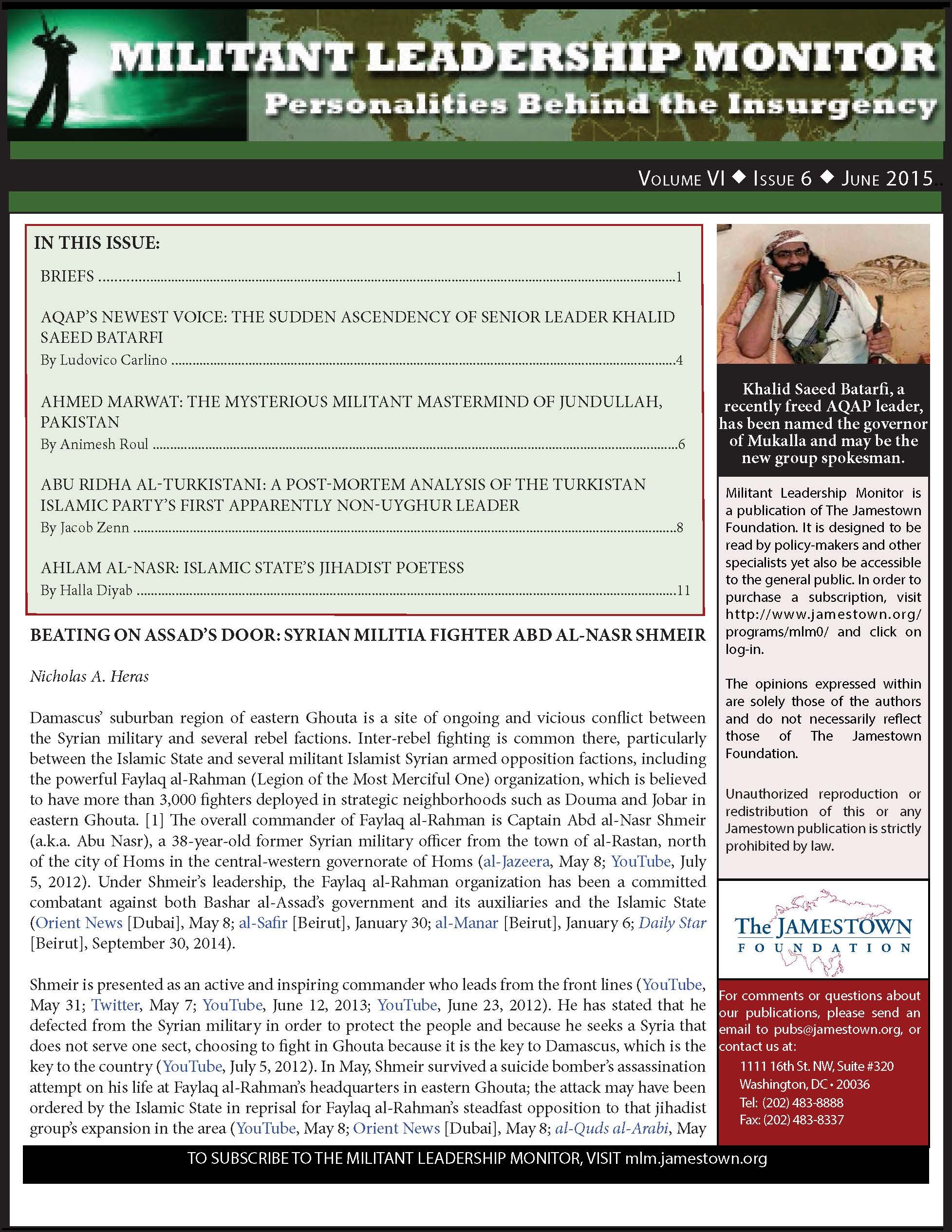 The June 2015 issue of Militant Leadership Monitor starts off with a brief of Captain Abd al-Nasr Shmeir, a former Syrian soldier turned militia leader in the Damascus suburban area of Ghouta. Nicholas Heras follows this up with one on Shaykh Abu Rateb al-Homsi, a cleric who lead Harakat Ahrar al-Sham al-Islamiya in Homs. The first profile is of Khalid Saeed Batarfi, an AQAP leader who was recently broken out of prison and is now the governor of Mukalla. Animesh Roul then delivers a brief sketch of Ahmed Marwat, the spokesperson of Pakistani terrorist group Jundullah. A post-mortem analysis of Abu Ridha al-Turkistani, the first non-Uyghur leader of the Turkistan Islamic Party, is detailed by Jacob Zenn. Finally, the issue closes with a look at Ahlam al-Nasr, the poetess of the Islamic State and one half of a propagandist power couple, by Halla Diyab.

In this month's issue of Militant Leadership Monitor, Jamestown analysts have written about militant and criminal underworld figures across the globe. In light of the rising tension between Lebanese Sunnis and Shiites that is being expressed in Syria, Murad Batal al-Shishani drew up a portrait... MORE
$20.00 – $25.00 Select options
In this Special Report on the Libya Elections we examine the entrance of militant leaders into the political scene as the country recovers from several decades of Gaddafi's rule. This 2012 Quarterly Special Report features five articles and a timeline commissioned by The Jamestown Foundation.... MORE
$20.00 – $25.00 Select options
This issue of Militant Leadership Monitor includes profiles of Alghabass ag Intallah, Syrian Major General Abdulaziz al-Shalal, Who's Who in the Jordanian Opposition, Mullah Nazir the "Good Taliban" and Female PKK leader Sakine Cansiz.
$20.00 – $25.00 Select options
In this Quarterly Special Report (QSR) on the rise of al-Shabaab, we focus on the various militants who are guiding al-Shabaab, an al-Qaeda-aligned militant organization that aims to impose Shari’a in Somalia. The group began as a radical youth wing of Somalia’s Islamic Courts Union... MORE
$20.00 – $25.00 Select options

The Jamestown Foundation was proud to host a webinar on... END_OF_DOCUMENT_TOKEN_TO_BE_REPLACED

Jamestown Foundation Analyst Richard Arnold was interviewed by PolitiFact for a story on the Lie of the Year 2022, or Putin’s long list of lies... END_OF_DOCUMENT_TOKEN_TO_BE_REPLACED

The February 2020 issue features a brief on Mullah Nangialai, an influential leader of a Taliban splinter group in Herat who was recently killed in an airstrike; a look at Abu Hajar al-Hashemi, the “Governor” of Islamic State’s Sinai province; a comparison of 2 men who ran Islamic State... END_OF_DOCUMENT_TOKEN_TO_BE_REPLACED