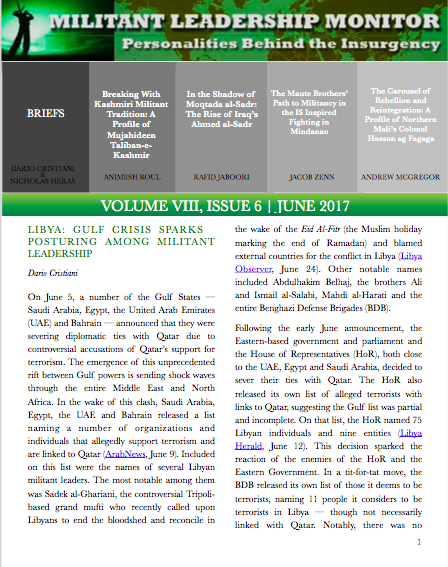 The June 2017 issue of Militant leadership Monitor has briefs on Libyan militant posturing in response to rising tensions in the Gulf and Saudi Arabian coalition ally in Yemen Shaykh Abd al-Wahab, as well as profiles of Mujahideen Taliban-e-Kashmir Commander Zakir Musa;  Ahmed al-Sadr, a rising leader in Iraq’s Sadrist Movement; the Maute Brothers and the IS inspired fighting in Mindanao;  and northern Mali’s Colonel Hassan ag Fagaga.

The Jamestown Foundation is proud to present a webinar on China’s... END_OF_DOCUMENT_TOKEN_TO_BE_REPLACED

On May 19, Voice of America posted an interview with Dr. Richard Arnold on the topic of Russian Cossacks’ involvement in the war against Ukraine. END_OF_DOCUMENT_TOKEN_TO_BE_REPLACED

In the June issue of MLM Nicholas A. Heras provides two briefs, one concerning a leadership dispute within the Syrian-back Abu al-Fadhal al-Abbas Brigade to Defend the Holy Shrine of Sayida Zeinab and a second brief about a ceasefire negotiated between MNLA leader Bilal ag Acherif and the Malian... END_OF_DOCUMENT_TOKEN_TO_BE_REPLACED