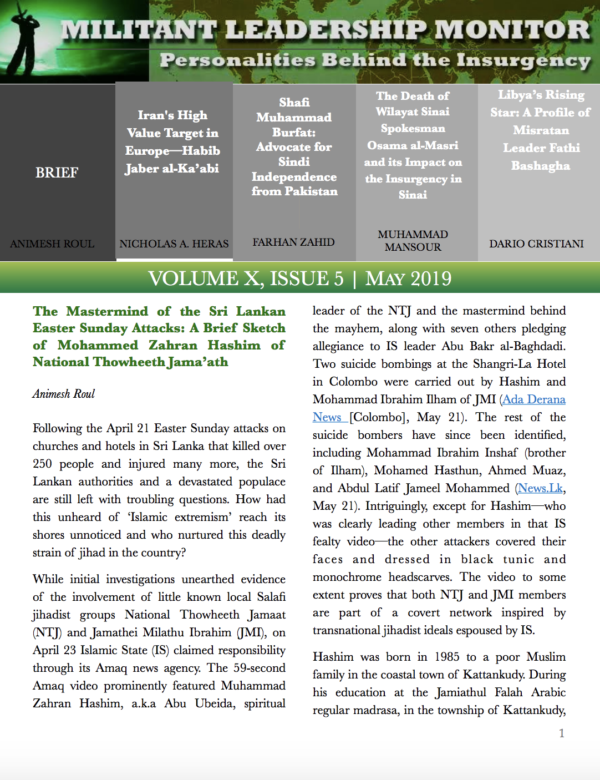 The May 2019 issue of Militant Leadership Monitor features an extended brief on Zahran Hashim, the mastermind of the Sri Lankan Easter Sunday attacks; a profile of Iran’s high value target in Europe, Habib Jaber al-Ka’abi; an analysis of Shafi Muhammad Burfat, an advocate for Sindhi independence from Pakistan; an assessment of the state of Islamic State’s Egyptian province, Wilayat Sinai, nearly a year after the death of its influential spokesman, Osama al-Masri; an in-depth look into Libya’s rising star, the Misratan leader and Government of National Accord’s Interior Minister Fathi Bashagha.

The horrible tragedy in Boston on April 15 has refocused Western attention on Russia’s troubled North Caucasus, which has already experienced more than a decade of turmoil and upheaval. Many perspectives exist in scrutinizing the deadly events surrounding the Boston Marathon terrorist attacks. But nearly... MORE
$20.00 – $25.00 Select options
This issue of Militant Leadership Monitor includes in-depth analyses of Ansaru's Khalid al-Barnawi, the Niger Delta's al-Haji Mujahid Dokubu-Asari, succession scenarios after Talabani, and the second part of a who's who in the Jordanian Opposition.
$20.00 – $25.00 Select options
In this “Special Report on The Syrian Uprising: A Focus on Parties and Leadership” we examine the roles of key religious, military, and political actors in the Syrian uprising. This 2012 Quarterly Special Report features five brand-new articles commissioned by The Jamestown Foundation and one highly... MORE
$20.00 Select options
This issue of Militant Leadership Monitor includes profiles of Pakistan's Most Wanted Adnan Rasheed, Laskhar-e-Jhangvi founder Malik Muhammad Ishaq, Lashkar-e-Taiba's Abdul Rahman Makki, and al-Shabaab's Abu Mansoor al-Amriki.
$20.00 – $25.00 Select options

On August 4, the Jamestown Foundation held a webinar  on... END_OF_DOCUMENT_TOKEN_TO_BE_REPLACED

Jamestown Senior Fellow Margarita Assenova was featured in an event with the New Lines Institute for Strategy and Policy on Capitol Hill. The event was... END_OF_DOCUMENT_TOKEN_TO_BE_REPLACED

It is late in 2018, a year that has been characterized by twists and turns in the U.S.-North Korean relationship. It may prove to be a pivotal year in the 70-year history of this tortured relationship. Or, as many pundits predict, it may turn out to be another journey... END_OF_DOCUMENT_TOKEN_TO_BE_REPLACED