The Azerbaijani-Armenian confrontation over Azerbaijan’s breakaway territory of Karabakh has been simmering for years. The 1994 ceasefire was broken time and again, soldiers on both sides were killed year after year, and all attempts to find a political solution to the conflict ended in deadlock; but the outside world paid little attention. There were always more important issues in the greater Middle East, in East Asia, in Ukraine, in the Balkans, in the Baltics, or between neighboring Georgia and Russia. But last month, on April 2, the Karabakh standoff suddenly erupted. Skirmishes along the line of conflict (LoC) escalated into full-scale battles, and Azerbaijani forces went on the offensive, taking a number of Armenian frontline positions while successfully repulsing Armenian counterattacks. By April 5, the so-called “four-day war” was essentially over—both sides agreed to a ceasefire, though skirmishes along the LoC continued. The Azerbaijani military continued to hold on to some of its captured frontline positions—much to the Armenians’ embarrassment (Vlast, April 9).

But Karabakh has again begun to slip from the limelight, with the international community apparently believing Moscow could use its considerable influence in both Yerevan and Baku to force the warring parties to the negotiating table and somehow keep a semblance of peace. Foreign Minister Sergei Lavrov traveled to the two regional capitals with new peace proposals from the Organization for Security and Cooperation in Europe’s (OSCE) Minsk Group (co-chaired by Russia, France and the United States). However, he failed to restart negotiations. According to informed sources in Moscow, Azerbaijan is eager to talk, believing tactical successes during the “four-day war” gave its government a strong negotiating advantage. The Armenians, apparently for the same reason, refused to talk. Both sides remain on a war footing. Armenian President Serzh Sargsyan reportedly conveyed to Lavrov Armenian displeasure with Moscow’s policy of balancing between Baku and Yerevan. Moreover, he refused to allow Russian peacekeepers into Karabakh (Kommersant, April 26).

Armenia is a long-time Russian ally, a member of the Russian-dominated Collective Security Treaty Organization (CSTO) and the Eurasian Economic Union. But Russia’s interests in the post-Soviet South Caucasus include Georgia and Azerbaijan, together with Armenia. Moscow seemingly wants to dominate the entire region, up to the former Soviet border with Turkey and Iran. Unequivocally taking sides in the Karabakh confrontation would not serve Russian long-term intentions. Russia has been selling large quantities of heavy armaments to Azerbaijan and providing Armenia lesser amounts and less-advanced heavy weapons—though either for free or on long-term credit, which will unlikely ever be repaid by this impoverished land-locked South Caucasus state. Last February, Russia gave Armenia a $200 million credit to buy new weapons, reportedly including long-range “Smerch” multiple rocket launch systems (MRLS), TOS-1A “Sunburn” heavy flamethrowers, and other weapons. Azerbaijan, using its oil wealth, reportedly procured some $4 billion worth of Russian weapons, including new S-300PMU2 and TOR-M2 antiaircraft missiles, hundreds of T-90C tanks, long-range heavy artillery, “Smerch” and TOS-1A systems, attack and transport helicopters, as well as other items. Armenia also has S-300PS missile systems—an older, non-digital, Cold War–era variant, granted by Russia (Vedomosti, February 25).

Both Baku and Yerevan protested Russian arms sales to the other party (see EDM, April 14), but with little success. After the early-April clashes in Karabakh, Armenian officials and the public called for Russia to stop supplying Azerbaijan with weapons, alleging they were being used against Armenian soldiers. But Prime Minister Dmitry Medvedev announced Russia will continue to sell arms to both sides: “If we will not, others will step it, which will make things worse and possibly destroy the present balance in the region” (Interfax, April 9).

In the “four-day war,” Armenian forces in Karabakh lost territory and officially declared 92 servicemen had died in action (RIA Novosti, April 13). Azerbaijani heavy guns reportedly devastated Armenian frontline fortifications. The TOS-1A “Sunburn” delivered thermobaric ordinance, also known as fuel or vacuum “bombs,” which scorched the Armenian soldiers in their dugouts and bunkers—a tactic first massively used by the Russian military in the Second Chechen war, in 2000–2001, and now in Syria, in Latakia province and in Palmira (see EDM, April 6, 14). Sargsyan fired several top generals allegedly responsible for failing to report the concentration of heavy Azerbaijani weapons, including TOS-1A close to the LoC. Armenian forces also suffered from an apparent breakdown in command and control as well as a lack of supplies to treat the many soldiers with severe burns inflicted by the attacking enemy TOS-1As (Kommersant, April 26).

The Azerbaijani offensive on April 2 seems to have been primarily intended to achieve a tactical victory and to heighten patriotism in a population badly hit by falling oil and natural gas prices. Both goals were achieved, but the temptation seems high in Baku to continue to press its apparent military advantage. In preparation for war, Azerbaijan closely cooperated with Israel to modernize its military, acquire reconnaissance and attack drones as well as medium- and long-range (150 kilometers) missiles with GPS targeting capabilities, modernize its T-72 tanks for modern warfare, and to procuring other modern weaponry. In drone equipment and in network-centric warfare capabilities, Azerbaijan today exceeds the Armenian military; the latter is armed with mostly heavy Soviet weaponry of the 1980s. During the “four-day war,” Azerbaijan’s forces reportedly scored several high-value precision hits, humiliating their Armenian opponents (Interfax, April 7).

To survive politically, Sargsyan cannot show any weakness, cannot negotiate any concessions, and must soon score some victory (military or political) to counter the Azerbaijani successes. This week, the Armenian government had reportedly approved and sent to parliament a resolution recognizing the self-proclaimed Nagorno-Karabakh Republic’s independence—a move that could have triggered a regional war. Later the Armenian authorities apparently backpedaled, announcing the independence resolution would be postponed and enacted only if major fighting resumes in Karabakh (Interfax, May 5). The temptation to use force seems to dominate both sides of the Karabakh dispute, while negotiations are deadlocked and the influence of outside powers is limited. Moscow’s proclaimed attempt to balance Baku against Yerevan is faltering and may have backfired by straining relations with both sides. An all-out regional war hangs in the balance and could drag in outside powers—Russia and Turkey, which are already at loggerheads over Syria. Meanwhile, both Moscow and Washington are, today, already deeply involved in numerous acute conflicts worldwide. Thus, the ability of Lavrov and his US counterpart, John Kerry, to effectively manage them all at once may be simply strained to the hilt. 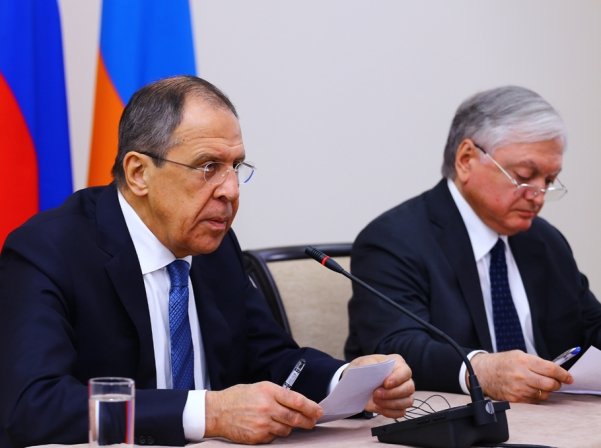 The Jamestown Foundation is proud to announce that it’s 14th Annual Terrorism... END_OF_DOCUMENT_TOKEN_TO_BE_REPLACED

On December 11, Newsweek published a story on Chinese espionage efforts in the United States, which included an interview with Jamestown Non-Resident Fellow Matthew Brazil... END_OF_DOCUMENT_TOKEN_TO_BE_REPLACED