With the announcement that the Permanent Court of Arbitration will rule on July 12 on its case between the Philippine and Chinese governments regarding China’s territorial claims in the South China Seas, tensions in the area are coming to a head (Court of Arbitration, June 29). On July 3, China’s Maritime Safety Agency released a notice to mariners declaring a sizable part of the South China Sea off-limits between July 5–11 for military exercises (China Maritime Safety Administration, July 3; see map). The off-limits area is more than 86,000 square kilometers, larger than South Carolina. China has also increased its tempo of public statements and rebuttals regarding the court case in recent months (China Brief, June 21). The various involved parties have marshalled lawyers, spokespeople and military vessels. China has also bankrolled and organized a massive militia of fishermen to support their claims. [1]

Though laws, Freedom of Navigation Operations and ancient maps have been the primary means of contest in this debate, insufficient attention is being given to arguably the most important issue: fish. As a major consumer of fish stocks, China is deeply interested in securing the fishing rights for itself and controlling access of other nations to the area. Ensuring adequate future supplies of fish—both domestically through aquaculture and externally through enforcement of territorial claims over large swathes of open sea—contributes to Chinese food security, which has repeatedly been listed a major priority for China’s top leaders (China Brief, March 8; China Brief, June 1). Less of a wall, Chinese claims—including the Nine Dash Line—are more of a Great Fishnet swallowing the South China Sea.

Fish is a major source of protein for all Southeast Asian nations. It supplements diets dominated by rice to add important amino acids and other nutrients necessary for growth. Many of these nations, particularly Vietnam and the Philippines, have high population densities and comparatively low amounts of arable land, further magnifying the importance of food sources outside traditional crops. Unsurprisingly, these two countries have been among the most vocal in pressing their competing maritime claims with China.

China itself has a large coastline, and a tremendous number of Chinese citizens rely on or are in involved in supporting the world’s largest fishing fleet. Many ships operate globally to access less contested fishing grounds, but a host of smaller vessels and subsistence fishermen plough the seas closer to home. [2] China’s coastal population is enormous: Guangdong province, which forms the northern rim of the South China Sea, is itself home to over 104 million people (Guangdong Government Statistics, May 11, 2011). With the semi-official remit of the Nine-Dash-Line and the might of the Chinese Coast Guard and navy behind them, Chinese fishermen have frequented the exclusive economic zones of many of China’s neighbors.

As seen from the map, the “Nine-Dash Line”—even only the area around land features within its borders is included, would dramatically shrink the Exclusive Economic Zones (EEZs) of the countries rimming the South China Sea, and with it, their fishing zones. Just as China’s demand for reliable sources of grain is driving a push for diversification and reform of agriculture in China, the demand for fish is going to be a powerful force driving Chinese policy toward the South China Sea. China’s neighbors are not just responding to a destabilizing reinterpretation of international law—they are facing a much more powerful neighbor maneuvering to monopolize key fish stocks, an indispensable source of protein for their citizens.

In late March, confrontations between Indonesian Coast Guard vessels and Chinese fishermen escalated to the point that the Indonesian government formally summoned the Chinese ambassador (China Brief, March 25). Tensions subsided but recently spiked again, as Indonesian Coast Guard vessels seized and subsequently destroyed Chinese fishing vessels caught operating in Indonesian Waters (Sina, June 25). Similarly, Malaysia has reported that over 100 Chinese vessels were operating in its coastal waters off near Luconia Shoals in the southeastern portion of the South China Sea (Straits Times, March 26). In late May, Vietnamese state media recounted an incident south of Woody Island (永兴岛) during which a Vietnamese fishing vessel was struck repeatedly by what appears to have been a Chinese Coast Guard Vessel (Truoi Tre News, June 19; see map).

Much of the attention on the South China Sea has been directed toward its implications for maritime security, freedom of navigation, and “militarization” of the area. But for many of the disputants, the eventual resolution of the disputed claims, and its implications for fishing rights, represents an existential threat: food security. Observers of the conflict and policy makers involved in proposing solutions should keep this issue at the forefront of their minds. China’s firm stance on the “Nine-Dash Line” and the South China Sea more generally has its roots in core issues like the legitimacy of the Communist Party, historical issues involving its territory and foreign relations. However, the importance of the South China Sea’s bounty of marine protein as a casus belli should not be discounted. 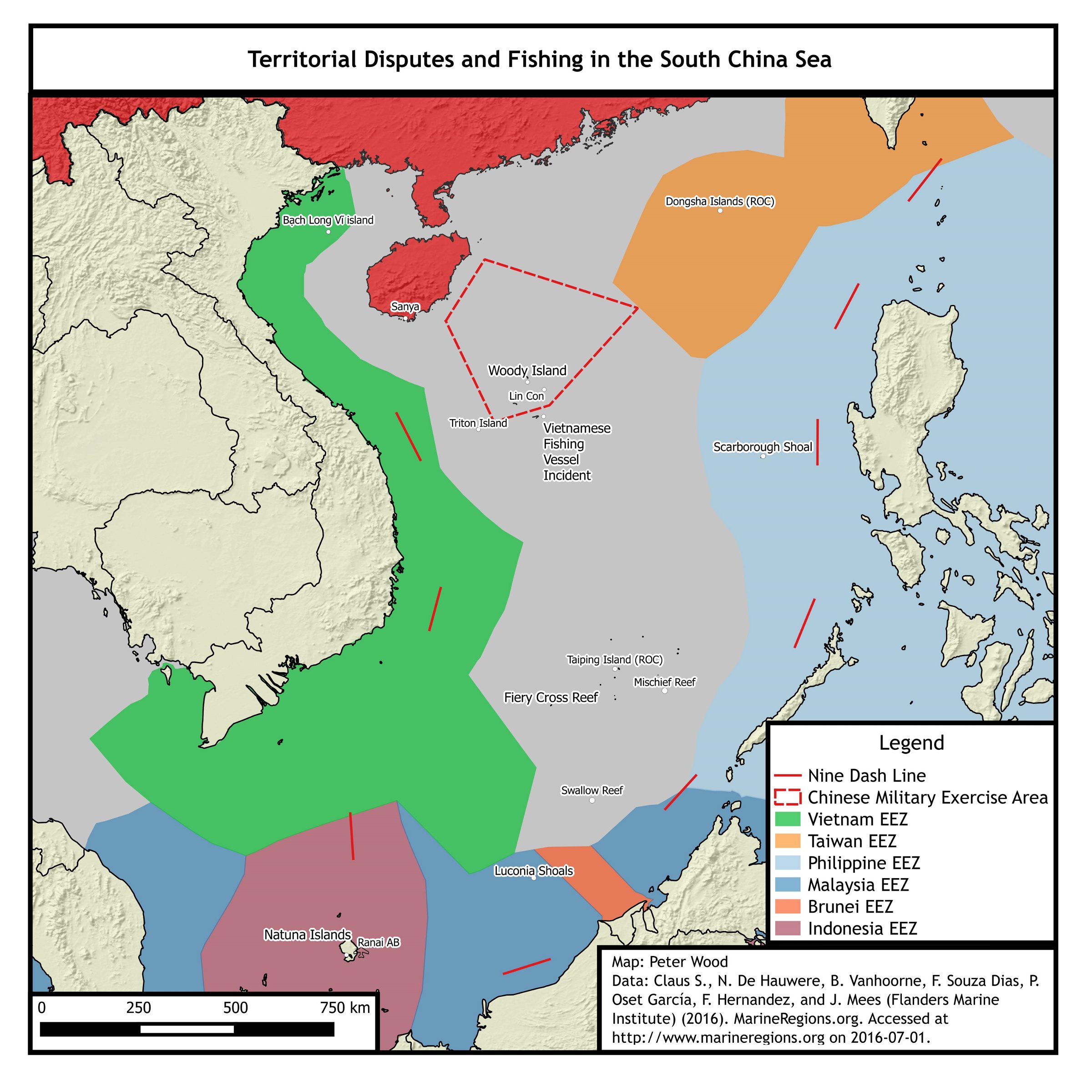 On present trends, Ukraine is losing the war against the invader... END_OF_DOCUMENT_TOKEN_TO_BE_REPLACED

On May 11, A News interviewed Jamestown Analyst Mykola Vorobiov about the current state of Russia’s invasion of Ukraine. END_OF_DOCUMENT_TOKEN_TO_BE_REPLACED

The March issue of Militant Leadership Monitor begins with an update on the efforts of Abu Ayman al-Iraqi, a deputy of ISIS commander Abu Bakr al-Baghdadi, in Eastern Syria. This is followed with a profile of Muhammad Ali Tambako and his expulsion as the vice-chairman of the Bangsamoro Islamic... END_OF_DOCUMENT_TOKEN_TO_BE_REPLACED