On March 31, after several days of deliberation (Imedi.ge, March 28), Georgia’s Republican Party (RP) declared that it would participate in the upcoming fall 2016 parliamentary elections separately from the Georgian Dream (GD) party. The two political parties have been partners in the ruling GD-led coalition since the parliamentary elections of 2012 (Newpress.ge, March 31).

The statement follows weeks of ferocious political bickering over various issues between the RP and another coalition member, the Industrialist Party. Their clashes even prompted Georgian Prime Minister Giorgi Kvirikashvili to state that the GD coalition was in need of renewal and, possibly, of a new strategic partnership agreement with the RP to continue cooperation (Civil Georgia, March 4).

Moreover, Georgian Energy Minister and Deputy Prime Minister Kaha Kaladze said that “it would not be bad if every [coalition member] party would participate separately in the [upcoming] elections and only after that [they] could decide in the parliament whether to create a coalition.” Kaladze, who currently also serves as the GD party’s general secretary, further added that he always expected the coalition eventually to disintegrate (Presa.ge, March 28). In fact, the situation around GD seemed so fragile that there were even talks of Irakli Alasania’s (minister of defense in 2012–2014) Free Democrats (FD) forming a coalition with GD-member RP (2030.news, March 28).

In light of these developments, a question emerges: Is GD finally disintegrating? On March 31, the Georgian media was abuzz with speculation, loudly declaring that the GD coalition was finally falling apart (Rustavi 2, Channel 1, Imedi TV, March 31). Needless to say, GD is certainly experiencing internal problems. At this stage, however, the claims of its final fragmentation might be overly exaggerated. First of all, as David Usupashvili, the chairman of the Georgian parliament and one of the leaders of the RP, as well as other senior RP leaders stated several days ago, the party was not even discussing the possibility of leaving the ruling GD coalition—only about running separately in the upcoming elections (Imedi.ge, Civil Georgia, March 28). And indeed, on March 31, the RP clearly stated that it would not leave the coalition government, where it holds the posts of the minister of defense, minister of environmental protection, and state minister for reconciliation and civic equality. Moreover, the party decided that its ten sitting members of parliament will stay within the GD-led majority in the national legislature (Civil Georgia, March 31). And notably, so far, no other coalition members have declared an intention to break away.

However, even if the GD coalition were to fall apart later in the run up to this year’s general election, the question remains why the much-anticipated disintegration had not yet occurred to date? The highly diverse ruling coalition, which was formed in 2012, is currently made up of six political parties, ranging from pro-market and pro-Western liberals, to nationalists, to Eduard Shevardnadze–era unreformed post-Communist nomenklatura. Since the very beginning, the coalition experienced internal bickering, logically leading to suggestions that GD would not survive for long (see EDM, January 13, 2013). And indeed, it has shed one key member already. In 2014, Irakli Alasania, then the sitting defense minister and the leader of the Free Democrats Party, was ousted from his cabinet post on the grounds of mismanagement of the ministry (Netgazeti.ge, November 4, 2014). In protest, the FD left the coalition (News.ge, November 5, 2014).

Surprisingly, this major, high-profile defection did not set in motion GD’s overall breakup. The coalition defied expectations and has stood united. How did GD manage this and survive? The answer lies in the utter weakness of the coalition’s member parties—a problem generally shared by the vast majority of Georgian political factions. Although, none of the GD member parties have ever mentioned or implied it (Cesko.ge, accessed April 1), they are all well aware—based on their experience prior to 2012—that separately, without the coalition, they would not be able to overcome the 5 percent threshold to make it into the parliament. Georgians on Internet forums have jokingly referred to those parties now in the GD coalition, as “two percent parties,” implying that they would never manage to garner more than 2 percent of national votes in order to enter the parliament on their own (Forum.ge, November 4, 2014).

The coalition, on the other hand, guarantees its members that they will have at least several seats in the legislature, which will help them prolong their existence as a political party for the next four years. It is this very survival instinct that was helping GD to stay whole and, hence, dominate Georgia’s political scene for the last four years, regardless of the broken pre-election promises and myriad unaddressed economic and political problems that the country is experiencing.

Running separately from Georgian Dream in the upcoming elections may cost the Republican Party dearly, prompting it to lose even those ten parliamentary seats that it now occupies in the 150-member legislature. Even if the party manages to overcome the electoral threshold and acquire some seats in the parliament, the RP may find itself on the fringes and without meaningful political power (as opposed to currently occupying the highly powerful speakership of the parliament and three cabinet posts). Such a probability may, in fact, force it to stay in the GD coalition for the foreseeable future.

As usual, the upcoming elections are once again throwing the entire Georgian political system into flux. Georgian Dream stands at the center of this process. Despite its multiple internal problems, the GD coalition has maintained unity, however delicate, and retained its grip on power. Regardless of visible cracks, it is still too early to say whether GD will disintegrate before autumn or even afterward. So far, it seems more likely that it will not. But as the election draws closer, the GD coalition’s actual durability will become much clearer, as will the overall stability of Georgia’s political system. 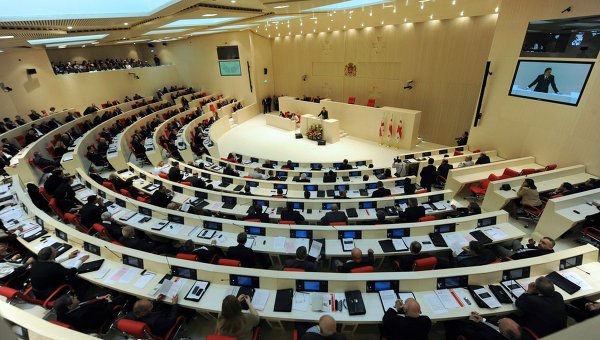 Back
Ukraine Faces Early Election if No One I..Next
South and North Ossetians Clash over Geo..

The Jamestown Foundation was proud to host a webinar on... END_OF_DOCUMENT_TOKEN_TO_BE_REPLACED

Jamestown Foundation Analyst Richard Arnold was interviewed by PolitiFact for a story on the Lie of the Year 2022, or Putin’s long list of lies... END_OF_DOCUMENT_TOKEN_TO_BE_REPLACED

Olevs Nikers and Otto Tabuns, Editors   The Baltic Security Strategy Report provides an in-depth security review of the Baltic countries of Estonia, Latvia and Lithuania. As highlighted in this important work, the Baltic States’ various national and collective strategies to address recurring regional threats since achieving statehood over... END_OF_DOCUMENT_TOKEN_TO_BE_REPLACED