Less than five years have passed since Kazakhstan experienced what may have been its most serious post-independence test of stability to date when, in December 2011, hundreds of people took to the streets in the western town of Zhanaozen, on the Caspian Sea. Clashes with riot police left 16 protesters dead and more than 100 wounded in what had started as rallies by oil workers to demand higher salaries and better working conditions (Zakon.kz, Inform.kz, December 16, 2011). While the Kazakhstani government has so far succeeded in maintaining domestic stability, in spite of the negative impact of lower oil prices on economic growth, new social turbulence might be brewing over a separate economic issue. A timely and efficient government response will be key to averting this unwelcome scenario. But steadily growing questions about the succession of President Nursultan Nazarbayev, at the helm since 1986 and president since 1991, are only exacerbating matters in the midst of the country’s oil-driven downturn.

At the end of March 2016, Kazakhstan’s National Economy Minister Yerbolat Dossayev held a press conference to present the latest amendments to the country’s Land Code. The changes were initially approved in 2014 and 2015, but were scheduled to take effect as of mid-2016. One of the highlights is the permission for individuals and private firms to buy agricultural land from the state, to be sold through public auctions. More than 1.7 million hectares of arable land are up for sale, including 1,271 plots totaling 645,400 hectares that have already been identified, Dossayev announced. The minister went on to say that successful bidders would be entitled to a 50 percent discount off the face value of any land that would be utilized within a ten-year period (Tengrinews.kz, Kapital.kz, Lsm.kz, March 30).

The fact that the Ministry of National Economy, not the Ministry of Agriculture has been in charge of land reform may look surprising. Yet, this “superministry,” established in August 2014, wields ample powers to oversee Kazakhstan’s main modernization agendas, in particular the brand-new land auction scheme. As regards the status of foreign agribusinesses in Kazakhstan, the revised Land Code offers them a possibility to extend the period of lease from 10 to 25 years as a means to guarantee sufficient returns on capital invested. Meanwhile, article 24—fundamentally unchanged—prevents them from acquiring land, unlike Kazakhstani nationals and the businesses they own and operate. So, technically speaking, foreigners are allowed to take part in future auctions—only as potential leaseholders, not landowners. However, Dossayev failed to stress this crucial point in his address (Kapital.kz, April 28; Forbes.kz, April 26; Zakon.kz, April 13).

On April 24, about three weeks after Dossayev’s press conference in Astana, hundreds of people gathered in the central square of Atyrau, in western Kazakhstan, to protest the sale of agricultural land to foreigners. The protest had not been authorized by the local authorities, but the police refrained from interfering. Three days later, two similar gatherings, albeit on a smaller scale, occurred in Aktobe, another western city, and Semipalatinsk, in the east. The crowd shouted the same slogans and, later, briefly met with local government officials who admitted, however, that they were not competent to hear and respond to these complaints. In the days that followed, hundreds more participated in other rallies in the Caspian port city of Aktau, in Oral (Uralsk—located in the country’s west), Kyzylorda (south) and the former capital of Almaty. In some instances, police arrested the “land activists,” as they came to be known, while they attempted to stage new protests in front of government buildings (Mgorod.kz, Fergananews.com, May 4; Matrica.kz, April 24; Forbes.kz, April 28).

Although the first rallies appear to have been motivated by a collective letter that a group of Kazakh intelligentsia dispatched to the presidential administration on April 11, there is little evidence of its further involvement in the “No land for sale” campaign. Instead, the protests resemble a more-or-less organized grassroots movement inspired by offended patriotic moods. In early May, Channel 1 Eurasia, a major TV channel majority owned by Kazakhstan Television and the Radio Broadcasting Company, aired a seven-minute program accusing unnamed “foreign powers” of seeking to destabilize the country by way of “totally illegal” protests. The anchor referred to “confidential reports” affirming that each participant in the rallies was paid between $50 and $150. “Never ever will our land be sold to foreign ‘daddies,’ ” he said, “pathetically, they are just jealous of our successes and want to sow instability when everything is going so well” (Regnum, May 2; Tobolinfo.kz, April 11).

Given that 20 percent of Channel 1 Eurasia is owned by Russia’s Channel 1, on-air allusions to “foreign powers” normally point to the West and the United States in particular. The governor of Aktobe Oblast, former deputy prime minister Berdibek Saparbaev, expressed just such a point of view when he said, on May 3: “Why do we have to listen to those who are hiding in the West? Why should we be working for Western money?” As for President Nazarbayev, he was more cautious in his public pronouncements and, on April 26, only called on “fear-mongers” to stop their rumors or, otherwise, face trouble. His next step, on May 5, was to veto the proposed changes to the Land Code until “further clarification.” On the same day, Nazarbayev dismissed National Economy Minister Yerbolat Dossayev, his deputy Kairbek Uskenbayev and Agriculture Minister Asylzhan Mamytbekov, whom he scolded for insufficiently explaining government policies to the population (Tengrinews.kz, May 5; Time.kz, May 3; Vlast.kz, April 26).

While there are no reasonable grounds to suggest that any external force is actually behind the recent land protests, Kazakhstan is facing another test of its ability to cope with economic difficulties and political uncertainty. When the Zhanaozen events erupted at the close of 2011, the Kazakhstani economy was growing by 7.5 percent per year. Whereas, the International Monetary Fund (IMF) predicts that Kazakhstan’s GDP will grow by a meager 0.1 percent in 2016 and by only 1 percent in 2017. Meanwhile, the country has yet to orchestrate a transition of power from Nazarbaev, who will be turning 76 on July 6. Another key aspect of the land crisis is the Kazakhstani-Chinese relationship: China, whose agricultural companies are particularly active in eastern and southern Kazakhstan, regularly appears in the opposition’s denunciations of the government’s seemingly dubious land schemes. By all appearances, more domestic tumult in Kazakhstan may still be ahead (Imf.org, May 8; Inform.kz, February 2, 2012). 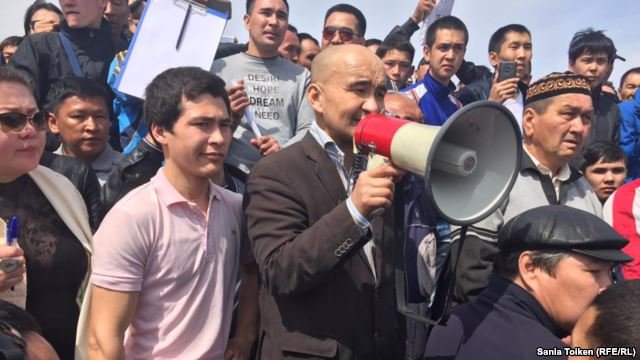