Russia’s military intervention in Syria is clearly not going well. Last Friday (July 8), another helicopter was reportedly shot down near Palmyra, and the Russian Ministry of Defense, after an initial denial, had to admit that the downed aircraft was not a Syrian Mi-25, but a Russian Mi-35M on a combat mission from the Khmeimym airbase near Latakia (Kommersant, July 11). President Vladimir Putin felt obliged to interrupt his “disappearing act” and made a pilgrimage to the remote Valaam Monastery in Karelia, where he asked the resident Orthodox monks to pray for the two pilots who lost their lives (Kremlin.ru, July 11). Prayers were not the full extent of the Russian response, however. On Monday, six long-range Tu-22M3 bombers delivered a strike on an Islamic State (IS) camp, allegedly destroying three tanks (Gazeta.ru, July 12). This one-off resort to heavy bombing provides little reassurance: it was to be expected that the small grouping of Russian Aerospace Forces presently involved in high-risk operations and dealing with strained logistics would suffer new casualties.

What is not certain at all is the strategic purpose of continuing these operations. Russia’s intervention saved Syrian President Bashar al-Assad last autumn, but the Russian effort was not large enough to secure for him a decisive advantage in the multi-party civil war; the retaking of Palmyra last March was merely a symbolic victory (see EDM, March 17, 29). Putin surprised his own top brass that month by ordering a reduction of the grouping in Latakia by half; and that has left al-Assad only able to hold the line, relying on massive Russian military aid, which cannot be sustained indefinitely (Lenta.ru, July 2). Russia’s sole aircraft carrier, Admiral Kuznetsov, is scheduled to arrive to the Eastern Mediterranean in October, but this experiment in projecting air power from the sea is unlikely to make a major impact on the course of entrenched battles in Aleppo or, indeed, Damascus (TASS, July 4).

The Kremlin is certainly aware that its forceful support of the al-Assad regime pits Russia in a profound conflict of interests with most other external stakeholders in the Syrian war. The only exceptions are Iran, which remains ambivalent about the scope of its involvement, and Israel, for whom the authoritarian Syrian leader is a lesser evil compared with the rise of Islamist extremism (Russiancouncil.ru, June 14). Many Moscow commentators predict that the United States’ push for “regime change” in Syria will lead to a direct clash with the Russian expeditionary forces; and some have presented last week’s downing of the helicopter as corroborating evidence (Nezavisimaya Gazeta, July 11). Putin sought to reduce this risk by initiating a new conversation on Syria with US President Barack Obama last week, but they failed to reach any common understanding regarding the means and ends of extinguishing the war (RBC, July 7). Now, US State Secretary John Kerry is coming to Moscow with a heavy portfolio of problems, including the latest spy scandal, hoping to secure a new compromise on the preservation of the partial ceasefire in Syria (RIA Novosti, July 11).

Somewhat easing the pressure on the Russian forces in Syria has been the swift de-escalation of the conflict with Turkey (see EDM, July 7). President Recep Tayyip Erdoğan found it opportune to offer an elliptic apology for shooting down the Russian Su-24 bomber last November, and Putin jumped on this opportunity to minimize the damage from the emotional quarrel by lifting the sanctions (Carnegie.ru, June 30). Russians responded to this reconciliation with quite remarkable enthusiasm. In a matter of a few days, Turkey became the most popular destination for summer tourism, and all the negative perceptions induced by months of Russian anti-Turkish propaganda disappeared without a trace (Novaya Gazeta, June 30). The extra-swift restoration of economic ties does not mean, however, that the sharp disagreements over Syria are overcome, as Turkey remains resolutely opposed to the continuation of the al-Assad regime and fiercely hostile to the Syrian Kurdish forces (YPG), who gained some political support from Moscow (Nezavisimaya Gazeta, July 6).

Russia is keen to restart its cooperation with Turkey against terrorism, particularly since the resumption of high-level dialogue coincided with the tragic June 28 terrorist attack in Istanbul; but this effort inevitably stumbles over familiar problems (Kommersant, July 1). Despite the loud official condemnation of the Islamic State, Russian forces are not prioritizing the fight against this quasi-state, instead targeting other groupings, like the al-Nusra Front, which present a more immediate threat to al-Assad’s forces (RIA Novosti, July 12). At the same time, Moscow is carefully monitoring US operations against the IS, both in Syria and in Iraq, emphasizing the setbacks but downplaying the steady advances (Gazeta.ru, July 7).

The terrorist attack in Istanbul revealed the scope of engagement of various extremist cells in Russia and Central Asia into the IS networks, as 11 Russians were detained in the course of investigation of the deadly plot masterminded in Syria (RBC, July 6; Kommersant, July 5). While Russian authorities were not unduly concerned about the outflow of radicalized youth to the war zones in the Middle East, now the return flow of seasoned fighters constitutes a grave security challenge, which has not as yet manifested itself in a wave of terrorist attacks inside Russia (Kavkazsky Uzel, July 13). The Kremlin, however, sees no particular need to concentrate state resources on deterring this threat, and Putin feels free to engage in his pastime of reshuffling over-ambitious government personnel and balancing their feuding clans (Slon.ru, July 1). This indifference may well come from the assumption that a large-scale terrorist attack in Moscow could mobilize public support for the Kremlin in the run-up to the parliamentary elections in September, much the same way as it happened at the start of Putin’s political career in 1999.

The Middle East is a theater of secondary importance in these political intrigues aimed at preserving Putin’s monopoly on power, and he has already harvested all the propaganda dividends from launching a small-scale but high-impact intervention. Kerry might, therefore, succeed in negotiating a deal on mutual restraint in targeting particular “safe areas” by air strikes, which cannot last long, because the fronts of the civil war are quickly shifting, while al-Assad’s forces will likely try to sabotage such a deal. It might be possible for the West to dissuade Moscow from being an active spoiler in Syria, but as the Russian intervention encounters new setbacks, the desire to retaliate by indiscriminate bombing will prevail over any common strategic sense. 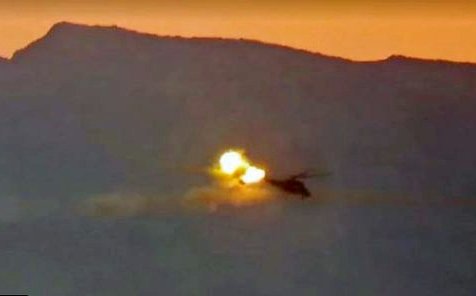 Back
Minsk Props up Currency, Diversifies For..Next
Cossacks and Moscow Still Disagree Over ..